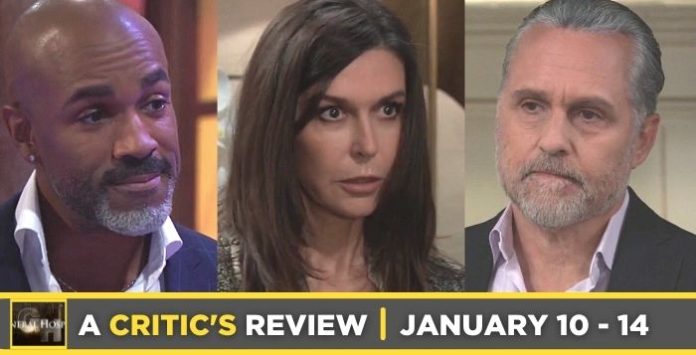 A Critic’s Review of General Hospital: In Need Of A Few Fixes

When it comes to General Hospital, every fan has their own opinion – and Soap Hub is no different. For five days, we sat and watched the good, the bad, and everything in between, and now we offer you a handy review, and a cheeky critique, of the GH week that was.

At some point, and hopefully, it’s the near future, General Hospital has got to explain Esme Prince’s (Avery Kristen Pohl) deal. It seems that every few weeks we get an exposition dump concerning the character – she’s an adoptee; her biological parents are dead; her adoptive parents divorced; said adoptive parents were broken up by a third party; she has siblings that she’s estranged from – but we’re still no closer to understanding Esme’s motivations or purpose for being. Fix this please GH.

And while you’re at it, see what you can do about Michael Corinthos (Chad Duell) and Spencer Cassadine (Nicholas Alexander Chavez). Those two are really starting to grate on my nerves and judging from some of the comments I’ve read on this site, I’m not the only one.

I’ve just about written Michael off completely – he is his mother’s son, that’s for sure. But it is particularly disconcerting that after all this time, Spencer is still being written as a petulant man-child.

* Curtis Ashford (Donnell Turner) wanted answers, but what little he got from Marshall (Robert Gossett) only raised more questions – and red flags. But here’s something to chew on…for every fan theory that Marshall ran afoul of a major player in the Port Charles underworld I ask, how did he manage that, when he and his family were based in Maryland…unless the General Hospital writers are ignoring that bit of continuity like they do so many others.

* Good God, The Hypocrisy Is Staggering: As the son of General Hospital’s preeminent Mafioso, who does Dante Falconeri (Dominic Zamprogna) think he is to comment on Brad Cooper (Parry Shen) making inroads with Selena Wu (Lydia Look).

* I get it General Hospital; you don’t know what to do with Roger Howarth. Here’s my opinion: he has about as much chemistry with Kirsten Storms’ Maxie Jones as Kelly Monaco’s Sam McCall has with Zamprogna’s Dante…and I’ve been pretty vocal about my opinion on that.

However, I’m actually digging whatever’s going on between Austin Gatlin-Holt and Britt Westbourne (Kelly Thiebaud)…but that might have something to do with the fact that Thiebaud has chemistry (in spades) with just about everyone on the canvas.

* Rather than launch into a lengthy diatribe against General Hospital’s decision to have Sonny Corinthos (Maurice Benard) quit taking his bipolar medication let me simply say that this storyline was riveting the first time it was told and given that this is a third or even fourth retread of that, I’m not holding out much hope for lightning to strike again.

Let me also say that I will never, NEVER abide seeing the man who used, abused, and murdered AJ Quartermaine confidently stroll into Monica Quartermaine’s (Leslie Charleson) abode. It’s just about as disgusting as disgusting gets.