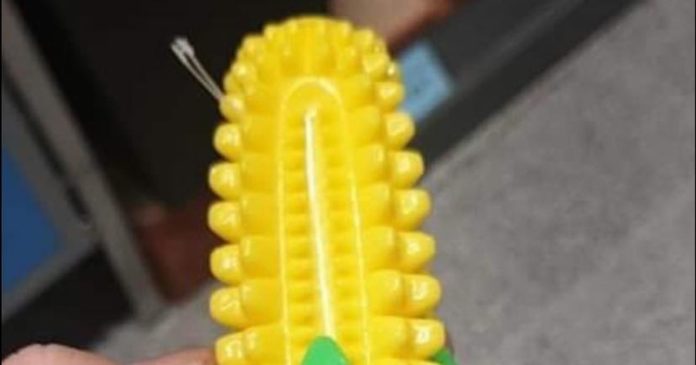 Aldi has been bombarded with comments over an “offensive” dog toy, which people fear may be used for something far more naughty.

The newly released £2.99 SpecialBuy for dogs has been ridiculed online for it’s X-rated design.

The corn on the cob-shaped item has a suction cup on the bottom, allowing purchasers to stick it anywhere they desire, reports the Mirror.

It also has ribbed edges imitating sweetcorn which dogs, and dogs only of course, are sure to love playing with.

A Facebook post, shared on Extreme Couponing and Bargains, reads: “Aldi are selling sweetcorn – shaped DOG toys for £2.99. Good emphasis on the DOG there guys.”

It wasn’t long before the complaints started rolling in. Dog owners jokingly slammed it, suggesting it’s not suitable for their pets at all.

While most users laughed at the design, others dubbed it “offensive”, especially if brought into a family home.

One user joked: “What in the name of Ann Summers is this,” while another added: “Ribbed for extra pleasure.”

A third user said: “I’m sure A&E will be seeing lots of these.”

Similarly, another added: “You just know someone is going to end up in A&E saying they tripped up at this accidently got lodged in their rear end! Some people just can’t train their dogs to put away their toys properly.”

“Absolutely no one is purchasing that for their dogs,” said someone else, although we have no idea what they could be alluding to.

This comes after Aldi scolded dirty-minded customers who noticed something strange about their Peppa Pig ice lollies.

A photo of the pink treats was posted to Twitter, where it was suggested that the shape of Peppa’s arm resembled male genitalia.

The caption read: “@AldiUK I was very happy to see these in your supermarket, but perhaps not as happy as Peppa is….”

The budget supermarket giant didn’t stay silent over the criticism of their design as they quote tweeted the post, writing back: “Keith that is an ARM.”