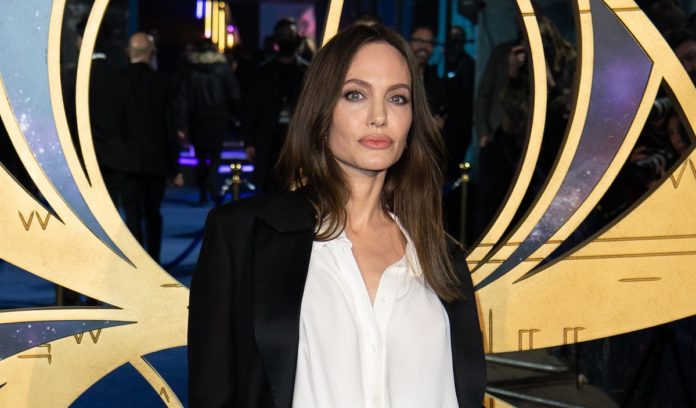 Should Angelina Jolie be worried about the toll her divorce from Brad Pitt has taken on their children? One tabloid claims Jolie’s latest victory may be the worst outcome for their family. Let’s check in on the Brangelina clan.

The latest edition of the National Enquirer reports Angelina Jolie is blinded by her desire for vengeance against Brad Pitt — and she’s jeopardizing their kids’ mental health. Pitt was originally awarded joint custody of his and Jolie’s young children until Jolie had the ruling overturned on account of Pitt’s lawyers’ business ties to their private judge. Now, Pitt is back to just visitation rights.

And apparently, Jolie isn’t missing a chance to rub it in Pitt’s face. The actress brought five of their kids along on her press tour for Eternals, and she even made sure they all hit the red carpet together. “Brad was heartsick, but Angelina has been crowing,” an insider dishes. “He feels like his family has been torn from him and his children have been poisoned against him. Angie has no sympathy and feels he’s gotten what he deserves!”

While Jolie’s lawyers have insisted she’s fighting for the wellbeing of her children, a psychiatrist tells the tabloid that she’s doing more harm than good. “As a forensic psychiatrist who has testified in countless divorce and custody cases, I want Angelina to know that by fighting Brad so aggressively for custody, she is leaving indelible scars on her kids,” the doctor asserts. “She also needs to recognize she’s being selfish by turning them against their father just to take her own revenge!”

Here’s the thing: We do not know the intimate details of Angelina Jolie and Brad Pitt’s separation, and neither does the tabloid. It’s wrong to speculate wildly about the family when we don’t know what’s going on behind closed doors. If the tabloid truly cared for Jolie and Pitt’s children, it wouldn’t get some random psychiatrist who hasn’t even met them to call them “scarred” for the whole world to read. It’s painfully obvious that the tabloid was just taking advantage of Jolie and Pitt’s family during a vulnerable time.

While Jolie and Pitt’s custody battle has been long and undoubtedly difficult for everyone involved, Jolie maintains that she just wants everyone to be happy. “I just want my family to heal. And I want everyone to move forward — all of us, including their dad. I want us to heal and be peaceful. We’ll always be a family,” Jolie said in a recent interview. No matter what’s going on in Pitt and Jolie’s custody battle, the magazine certainly doesn’t have any right to comment nor any legitimate insight to provide.

The Tabloid On Angelina Jolie

It’s hard to trust anything the National Enquirer says about Jolie. Earlier this year, the magazine claimed Jolie was pawning Brad Pitt’s art to get back at him. Then the outlet alleged Jolie was “frantic for cash” as Pitt stopped her from selling some of their property. And most recently, the publication went after Jolie for being too skinny. Obviously, the Enquirer has a glaring bias against Jolie.