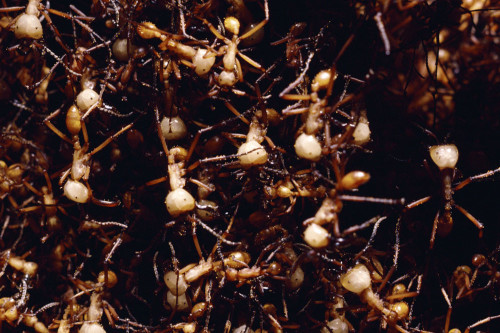 Ants can sniff out cancer in humans

Ants have the ability to sniff out cancer in humans.

Ants can sniff out cancerous cells in humans

Experts from the French National Centre for Scientific Research (CNRS) have found that the ant species Formica fusca has a well-developed sense of smell.

It has been suggested that ants could turn out to be better than dogs at locating cancerous cells in humans although more clinical tests must be carried out before they are used in hospitals.

In the study, the ants were exposed to two smells – one of which was the odour of cancerous cells.

The researchers discovered that “ants discriminate between cancerous and healthy cells and between two cancerous lines”.

“Our approach could potentially be adapted to a range of other complex odour detection tasks including the detection of narcotics, explosives, spoiled food, or other diseases, including malaria, infections, and diabetes.

“With regards to cancer detection, our research will now aim to widen the range of cancer-related odours that can be detected by ants, moving to the detection of body-emitted odours.”