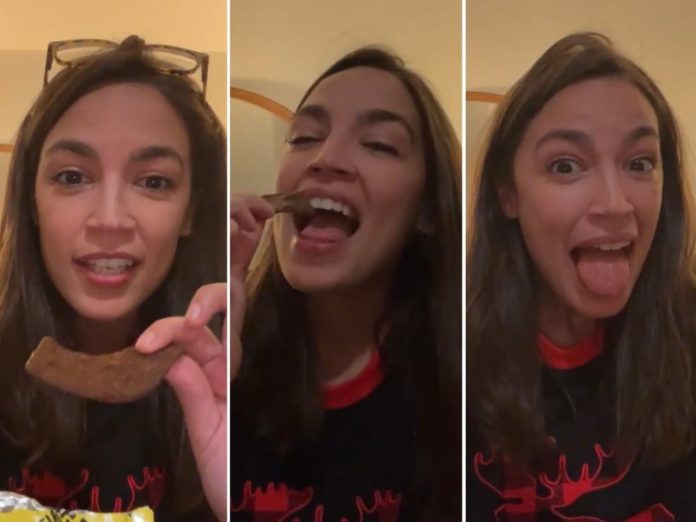 Alexandria Ocasio-Cortez was left feeling the heat after she bravely took on the One Chip Challenge during an Instagram Live on Christmas.

After the New York congresswoman wished everyone a Merry Christmas, she shared how she “decided to do something a little crazy” because she was gifted the spicy chip.

“So I open my stocking and this was in my stocking – a spicy One Chip Challenge,” she laughed as she read the packaging with the ingredients which said: “Carolina pepper and Scorpion pepper chip.”

Describing the challenge as “just a quick little Christmas funny thing,” she soon admitted: “I’m already scared… this is scary. First of all can we talk about how this is shaped like a coffin? Like I’m in trouble,” as she showed off the box the chip came in.

The One Chip is described as being “straight from hell” and was created for “the sheer pleasure of intense heat and pain.” The challenge is to be able to eat the chip and see how long you can last without having anything to eat or drink.

Celebrities who have tried out the challenge for themselves include Kristen Bell, Michael Peña and Shaquille O’Neal.

AOC then read out an amusing comment from a viewer: “Someone said you have to prove your decision-making skills by bailing now.”

Ahead of the challenge, the 32-year-old came prepped. “I have oat milk, like a proper millennial I guess, I have some bubble water. I’m really scared y’all, I don’t know how bad this is,” she said.

The chip was packaged in plastic wrapping and AOC couldn’t hide her shock when she saw its appearance. “It’s black! This chip is actually black – OK I apologise in advance if when I eat this I suddenly log off because this gonna be really bad.”

Before giving it a taste, she then took the risky move of smelling the chip and ended up coughing.

Her French bulldog Deco can be heard barking, and AOC joked: “Deco is trying to save me from myself right now, that’s why he’s barking.”

“Oh Lord, I need everyone to say a prayer for me. Put some virtual hands on me,” she then counted down from three and ate the entire chip.

Chewing for a moment and around 20 seconds in she said: “Okay, the heat is coming through… Oh my god y’all! Y’ALL!” as she fans her hands and opens her mouth to try and cool it down.

“OH MY GOD, OH MY GOD! Lion’s breath… this is really hot. My ears feel hot,” she said after a minute.

“You got this you’re fine, it’s fine, I’ve seen you eat hot food before it’s fine,” Roberts said to AOC in the background.

At a minute and a half, AOC admitted defeat: “Ok bye y’all, I gotta say bye,” as she sipped her drink and continued fanning herself.

After AOC’s attempt at the One Chip Challenge, viewers took to Twitter to share their thoughts and loved that she had a go.

After logging off abruptly, AOC later updated her 8.6m followers on how she was doing 20 minutes after trying the challenge.

Safe to say she wasn’t a fan of the hot chip after describing it as “probably the worst culinary experience I’ve ever been through in my whole life.”

But she assured viewers that she was okay.

On Twitter, the progressive congresswoman jokingly warned off others trying out the challenge for themselves and tweeted: “Protip: Do not do this,” with a laughing emoji.