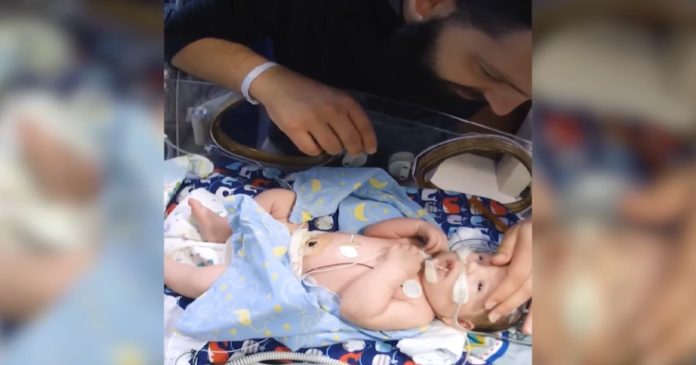 Baby Dies For 20 Minutes, Then Nurse Witnesses A Miracle

This story is one example of the Lord’s healing and we pray that it leaves you trusting God no matter what the situation is in your life.

Jacob and Hannah Sheriff were a beautiful family of six from Sherman, Texas, and in 2018, they were so excited to welcome baby no. 5 whom they named Urias or “God is light.” The light was about to shine brightly in their lives as well as others around them but the journey that led to his birth was not all celebration and laughter.

While Hannah was in labor at a hospital in Texas, she felt something wasn’t right. “I looked up at my nurse and I said, ‘I’m not OK,’” she said in an interview with CBN. “I said I felt like I’m going to faint or pass out. The room just began narrowing.”

Just as Hannah wasn’t feeling right, the baby was also impacted which prompted the medical team to prep for an emergency C-section. Dr. Kinion Whittington, OB-GYN physician for Hannah said, “At that moment it became, everybody, jump on and let’s go,” said Dr. Kinion. “We got a big-time emergency.”

When Jacob got into the operating room, he was able to understand how serious the situation was getting, Hannah had a placental abruption that caused her to lose a lot of blood. Their unborn baby Urias had to be severed from the placenta before time with no sign of life. “I opened up the uterus; there was just blood everywhere,” Whittington recalled. “Everywhere.”

Jacob saw his son emerge and said, “And then I see him come out and he doesn’t look like … I mean, he’s dead,” he said. Urias did not have a pulse and looked limp. Jacob did not want to give up on his son and turned to prayer and asked a few friends and family to begin interceding to God for their son.

As prayers were being lifted up to God, the doctors were performing CPR on baby Urias. “After about 10 minutes, if you don’t have a fetal heart rate, it’s just a futile effort,” Whittington said. They continued CPR for 20 minutes but failed to revive him, they did get a pulse, but the damage was done.

Jacob had to leave Hannah in the hospital and travel with Urias, who was being intubated and taken to Texas Health Presbyterian in Plano, 80 miles away. Even during the trip, Urias began having seizures and was diagnosed with hypoxic-ischemic encephalopathy. His brain was damaged due to a lack of oxygen and blood.

Dr. Eduardo Perez, a neonatologist, said, “He had the severe form, the one that we consider that is at high risk of having long-term delays in terms of development.” The experienced parents were told that Urias might never walk, talk or eat by himself and would likely have cerebral palsy and seizures.

Medical staff put Urias on a 72-hour cooling treatment so that his body temperature would be lowered to minimize damage, but they were told that 40% of patients don’t make it. “It’s just one punch after another,” Jacob recalled. “I can’t control anything, but I can trust God. I don’t feel it, like some emotional thing. It was a determination and a commitment: I’m going to trust God.”

That unchanging trust in God paved way for Hannah and Jacob as they requested prayer from the faithful on social media regarding the life of their little one. The post went viral and a Facebook page was created called “Pray For Baby Urias.” Initially, they thought it was going to be only a handful of prayer warriors but it became popular around the world.

“We thought it was going to be just a few people, but it ended up being other churches, friends of friends, and believers ended up being around the world, praying for our son,” Jacob said.

The worldwide movement of prayer for the life of Urias moved the hand of God and a miracle happened at the hospital. A nurse by the name of Latricia Bell said that she witnessed a miracle one night while she was checking on Urias and saw his eyes open, she could not believe it and rushed to get Jacob.

Bell said, “He had been laying so still,” she said. “And for him to open up his eyes, looking around, this was a big deal!” When Jacob saw the sign of life in his son, he was filled with hope and returned to prayer. It was difficult for him as the doctor’s report kept ringing in his ears.

Jacob told CBN, “It’s like I could hear their voices again, what they’re saying about him,” Jacob said. “And I just, remembered, ‘Don’t be afraid; believe only.’” After Jacob had left the room, Bell had the most supernatural experience and said that she felt she was in the presence of God.

Bell recalled what happened that moment, “I felt such a warmth,” she said. “Every hair on my body stood up. I knew that I was in the presence of God. He — He was right there, at that moment. I looked at the monitors, and there were no more seizures. That was the end of it. You hear about miracles, but God let me see that one.”

It was a road to recovery for Urias from then on as he recovered and began breathing on his own. He went home with his parents three weeks later and achieved every normal baby milestone. His parents waited for the neurologist’s report at the end of the first year. “I’ve only had a couple other cases where people have made a full recovery, and I’m just telling you, he’s one of them,” the doctor said.

Urias’ life is a reminder to his parents and everyone around him that God is with His people all the time and He is still in the business of healing people. “What I hope people have learned is not just how to work with God, but how to trust him,” Jacob said. “Even in moments where I don’t feel Him, like, I can’t see Him, His faithfulness doesn’t change,” Hannah said.