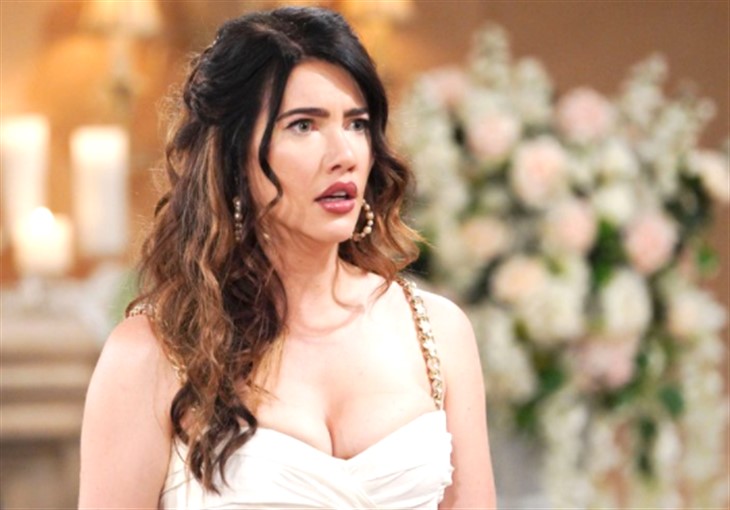 Longtime viewers of The Bold and The Beautiful as well as its sister soap The Young and The Restless will understand why the Forresters were so upset when Sheila came in the mansion and claimed to be John “Finn” Finnegan’s (Tanner Novlan) birth mother! Steffy did a good job of hiding her fear behind anger, but Ridge Forrester (Thorsten Kaye) knew the fear that both Steffy and likely her brother Thomas Forrester (Matthew Atkinson) were hiding.

The Bold and The Beautiful recaps reveal years ago, Sheila got into an altercation at the mansion with Brooke Logan Forrester (Katherine Kelly Lang) and Taylor Hayes, (Hunter Tylo) Steffy and Thomas’ mother. Brooke and Taylor were shot – Brooke survived, but Sheila somehow managed to fake Taylor’s death and she was not found alive for years.

Viewers of The Bold and The Beautiful will see that Steffy doesn’t want Finn to have anything to do with his “new mother” whatsoever! However, Finn will still want to hear Sheila’s side of things and they will text each other in secret.

This could undermine Finn and Steffy’s new marriage. Secrets kept from spouses are never a good thing, as evidenced by Quinn Forrester’s (Rena Sofer) fraught relationship with Eric Forrester (John McCook) over the years! Keeping secrets and doing things behind Eric’s back made it really easy to lie, and when her lies have been exposed over the years it eroded Eric’s trust.

If Finn outright lies to Steffy about his secret relationship with his mother on The Bold and the Beautiful, and perhaps even meeting secretly with baby Hayes so she can get to know her grandson, this could be the beginning of the end for the once happy couple. Steffy realizes that Finn may have a hard time believing that Sheila is a monster, especially now that she is trying to convince the world that she has changed, but she’s been much too dangerous over the years to be given the benefit of the doubt!

On the ‘Drink Champs’ Podcast, Drake will finally address his old beef with DMX.