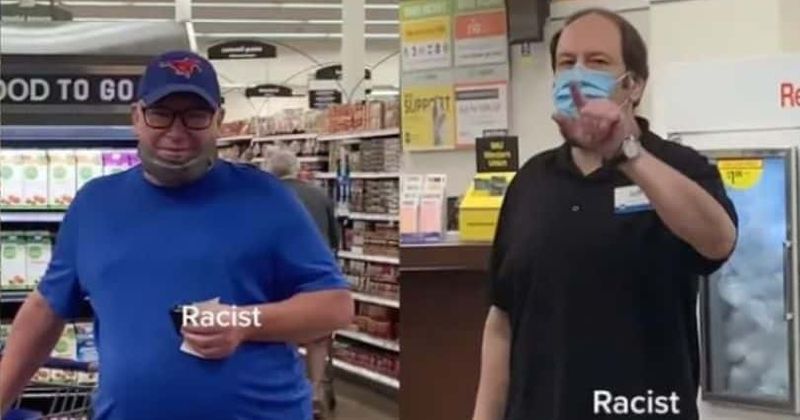 Two White men allegedly harassed a Black woman at a supermarket in Texas while she was working for Instacart. A video of the incident posted by TikToker @deekotapa0 last week has been viewed over 2,00,000 times. In the video of the incident, which reportedly occurred at a Kroger store in Dallas, the woman can be seen shouting at a White man wearing a blue T-shirt, presumably after the harassment has already taken place.

“You’re a customer, you can leave me alone, OK?” the Black woman says. “I’m doing my job; I’m instacarting.” As the man tries to say something, she counters him, saying, “You wasn’t here 15 minutes ago.” This incident is not a rare one as there have been several instances of harassment and discrimination raised online since Covid-19 set in. People complaining about mask mandates in shops have been the most common refrain. In June this year, a video capturing a brawl in a Walmart went viral. The shocking video showed a Walmart security worker knocking a customer out stone-cold with one punch after the shopper apparently spat on him. In March, there was also the case of an NYC anti-masker who hurled the N-word at a bagel shop worker when asked to cover her face.

Follow-up videos posted to her account suggested that the woman arrived at her workplace and realized that she had left her card back at home. She alleges the harassment took place after she returned. In the video, when a man tries to defuse the situation, the woman can be heard saying, “I hear you, sir, but I’m pissed off because I’m already pissed off with my order, but he walking up behind me, telling people to guard the door. Before you walked up, the dude with the [inaudible], before you walked up he was talking to somebody already.”

The camera then pans to a man in a black T-shirt trying to confront her, the woman says, “Leave me alone.” “You walking away? You could’ve walked 10 minutes ago,” she says as the man turns around and leaves. Turning the camera on a man in the blue T-shirt, she asks him not to ‘worry about her daughter’.

Another employee of the store, who is not visible in the video, can be heard telling the woman to stop talking, to which she replies, “You could tell them to stop talking to me. If they stopped talking to me, I wouldn’t even be this loud sir.” After the first video was uploaded, she went on to post a series of other videos, explaining in detail what exactly happened with her at the store. Some of her videos were even reported for the platform’s policy violation but it appears as though they were eventually cleared.

She explained in a second video that she had asked the manager to help after one of the men refused to leave her alone. She said that the man did not leave even after she asked him to leave her alone “more than 10 times”. Another video showed her breaking down and expressing her disappointment with continuous racial discrimination. “This racist shit is getting out of hand, it’s 2021,” she said.

In a video she posted later, she talked about why she argued with the men. “I don’t need my kids growing up thinking they can’t move and be them, period, because of their [skin color] or because of how they act or because they’re speaking their mind,” she said.

What’s Really Going On With All Of Donald Trump’s Real-Estate Challenges?

Chris Rock Has COVID-19 and Told Followers to Get Vaccinated