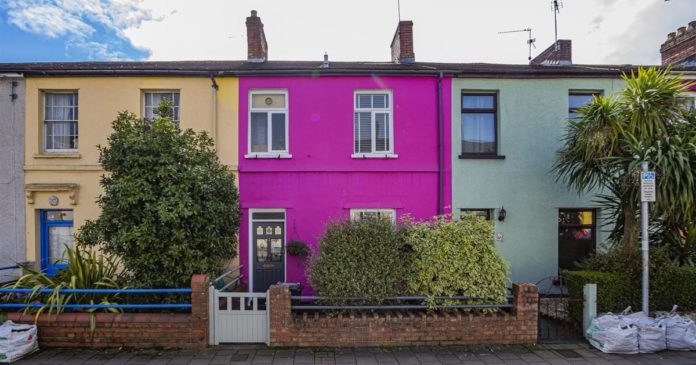 A bright pink house on a street known for having incredibly colourful homes has gone up for sale, but it’s not even the brightest property in the area of Cardiff, Wales

A bright pink house has gone up for sale on a street known for having incredibly colourful homes – but what’s on the inside is more surprising.

Most of the houses on Elm Street in Cardiff, Wales, are incredibly eye-catching as they are painted in bright colours including mint, lemon, raspberry, and sorbet pink.

Other homes have been adorned with murals including a war scene and a homage to flags, and some have props outside to add to the theme, as Wales Live reports.

And now this pink house has gone on sale and could be yours for around £240,000 – but inside there’s a surprise as it’s nowhere near as colourful as the outside.

The house is more traditional inside
(

What do you think about the bright pink house? Let us know in the comments…

This terraced house stands out as part of a row of five homes, and the pink face is tempered with white windows, a dark grey door, gate, and railings.

Inside it’s not quite as colourful, with soft lemon and rich berry red walls, and tones of pink to tie in the exterior.

At the rear, there’s an open-plan space and a slate floor that backs onto a kitchen with solid wood worktops and a farmhouse-style table.

The stable door at the rear opens out onto a surprise 100-foot garden.

The house isn’t quite as colourful from the back
(

The house is described as not needing any redecorating, but the new owner is welcome to repaint the exterior if they wish – although they’ll have to do something to fit in with others on Elm Street.

Claire Raisin recently moved onto the street and said the best thing about the address is the people that live there, and not actually the colourful houses that bring so much joy to any visitors to the road.

Even as recently as 2020, residents have been adding to the colour on the street with the addition of a stunning World War II mural.

The poppies and Hurricane planes have a heartfelt significance to the owner of this particular house on Elm Street, but there’s no pressure to go bright and colourful as there are still plenty of white and cream homes on the street.