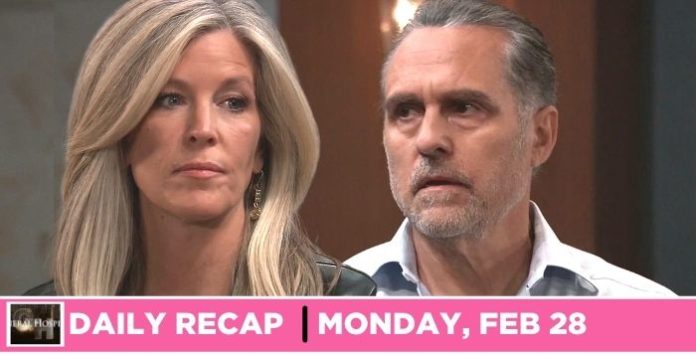 The GH spoilers recap for Monday, February 28, 2022, features another confrontation between Carly Corinthos and Sonny Corinthos that tells them it’s definitely over.

Carly (Laura Wright) was furious to see Nina Reeves (Cynthia Watros) in Sonny Corinthos’s (Maurice Benard) penthouse when she arrived with Drew Cain (Cameron Mathison) to tell him that Peter August (Wes Ramsey) is dead and therefore Jason Morgan’s (Steve Burton) killer has been brought to justice. Nina made herself scarce as Carly delivered the news, and Sonny said he already knew.

When Drew decided to leave, Sonny told Carly he didn’t want Donna staying with him till his meds were regulated. He then told her the whole sordid tale of going off his meds, and Carly remembered Nina trying to tell her this, but blamed Nina for not getting the words out. Carly remembered not letting Nina get a word in edgewise, but she ignored that part. Nina helping Sonny through his med problems made Carly angrier than usual, which then made Sonny angry. As soon as she left, he signed the divorce papers and she did the same in the hallway.

Meanwhile, Drew and Nina ran into one another at Charlie’s where he thanked her for helping Maxie Jones (Kristen Storms) out with the Bailey Louise secret but chastised her for keeping Sonny’s living status a secret. Nina didn’t really want to hear any of it.

It’s been a year since Franco Baldwin (Roger Howarth) was senselessly killed, and his adoptive mom, Betsy Frank (Deborah Strang), misses him and feels him wherever she goes. When she showed up at the hospital after a message from Elizabeth Webber Baldwin (Rebecca Herbst), she told the nurse just that. However, when Scotty Baldwin (Kin Shriner) spotted Betsy, he began to wonder if she may be the person playing dirty tricks on Elizabeth, especially after she showed him the note that was signed “B.”

Elizabeth was more concerned with her teenage son, Jake Webber (Hudson West), as Scott mentioned he has been acting angst-filled of late. She tried to put it all out of her mind when she got home, but instead, she looked up and there was a giant portrait of herself staring back at her.

Diane Miller (Carolyn Hennesy) put two and two together and got Harmony Miller (Inga Cadranel) as the woman who took in a baby and forged a birth certificate that Alexis Davis (Nancy Lee Grahn) was telling her about. Alexis wouldn’t name names, but when Harmony showed up at Alexis’s office, Diane wasn’t very nice to her.

Harmony told Alexis she lied to Willow Tait (Katelyn MacMullen) once again and told her she found her birth certificate. She also told Alexis she found a way to get another forged one. Alexis wondered aloud if Harmony stole Willow as a baby and Harmony didn’t bother answering that one.

Over at Jasper Jacks’s (Ingo Rademacher) old house, Hamilton Finn (Michael Easton) and Harrison Chase (Josh Swickard) discussed Brook Lynn Quartermaine (Amanda Setton), and Chase admitted they kissed and he has feelings for her, but also sadly told his brother that BLQ left town to visit her mother as quickly as she could now that Bailey is back with her real mother.