By Roger Brown
September 17, 2021
Behind Viral VideosLocal News
Facebook
Twitter
Pinterest
WhatsApp
Attorneys representing Davion Pringle say officers who pulled him over for a traffic stop crossed a line.
CONCORD, N.C. — The Concord Police Department said their actions in a traffic stop arrest captured in a TikTok video were justified, but the attorneys representing the man arrested, and two other women at the scene, say officers crossed a line during the August 2021 incident.

The video shows Concord police officers arresting 21-year-old Davion Pringle on Aug. 27, 2021, and placing him in handcuffs at a Harrisburg gas station.

The video begins after Pringle had already brought his vehicle to a stop and just before officers shatter the driverside window.

A police department incident report given to WCNC Charlotte says the arrest happened along NC Highway 49, and police pulled him Pringle for failing to properly display a license plate. However, Concord officers say Pringle did not stop for their flashing lights, allegedly refusing to pull over.

Pringle did eventually pull over at the gas station in Harrisburg, but a statement from the department says he appeared to reach around and under the driver’s seat. Officers and deputies with the Cabarrus County Sheriff’s Office said they carried their service weapons in a “low ready” position, and Pringle allegedly refused to comply with orders given by police.

Eventually, Concord officers said a deputy used an “unknown object” to shatter the driver’s side window and unlock the driver’s door to open it. The department said Pringle eventually stepped out on his own and was arrested without further incident, but still described his behavior as “unlawful and dangerous” in their statement to WCNC Charlotte. 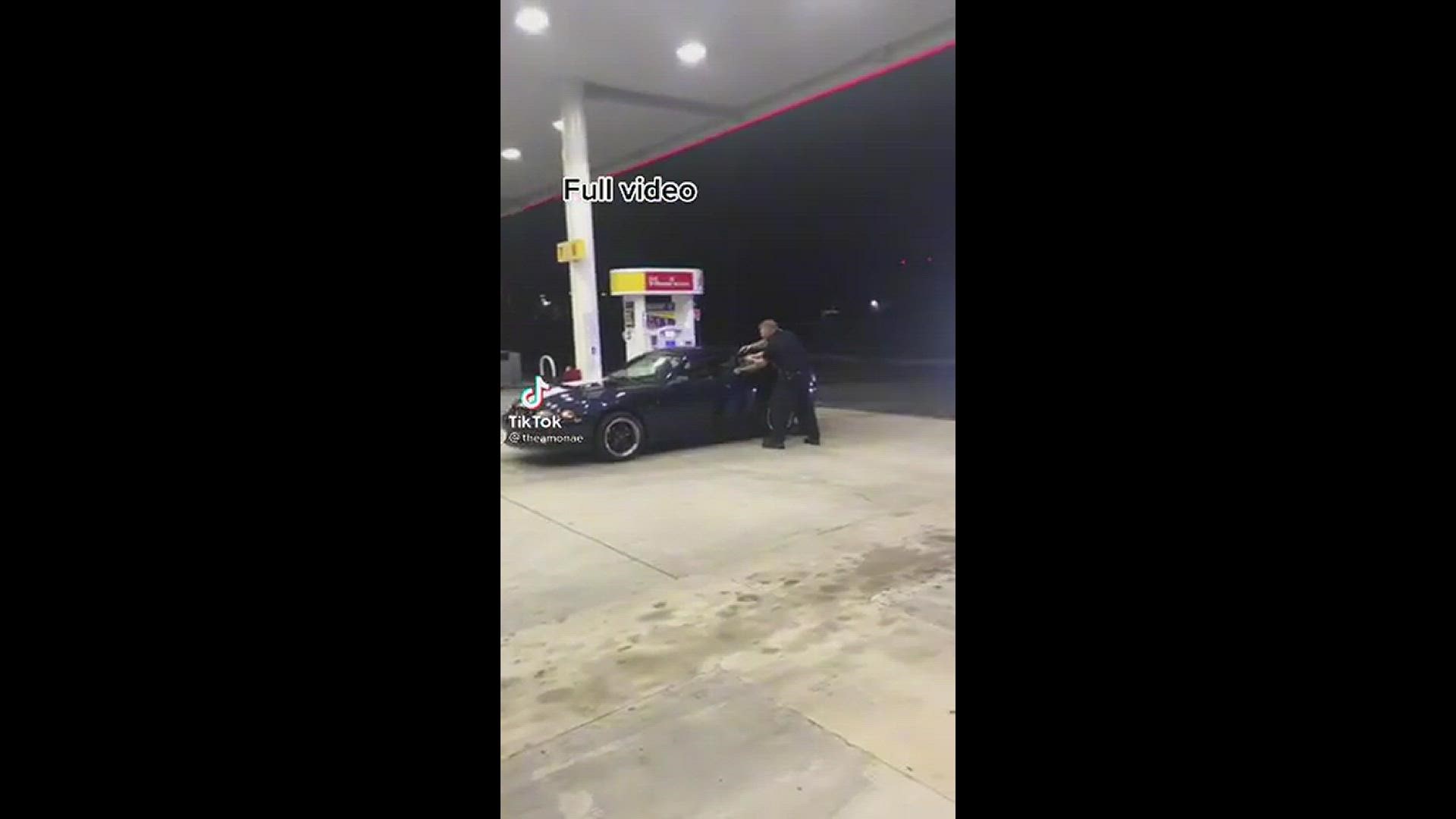 Pringle was then taken to jail, charged with two misdemeanors tied to his alleged refusal to comply, and given warnings for failing to display a license plate and not having insurance.

During the arrest, the department also handcuffed Imani Grier, a passenger in the car who started recording the incident on her own phone. The Oakhurst Legal Group, who represents Grier, Pringle, and Pringle’s mother, Malissa Baxter, said in their own statement Grier’s phone was confiscated, a claim the department rebuked. Concord police also said they kept Grier on the phone with Baxter so that Baxter could get to their location.

The department noted Baxter and Grier both filed complaints, which are under investigation.

The full statement from the Concord Police Department follows:

A Concord police officer attempted to stop a vehicle just north of Stough Road on NC Highway 49 on August 27, 2021, at approximately 10:51pm, for failing to display a license plate – which is a violation of NC General Statutes. The officer alerted the vehicle’s driver of his intent to pull the vehicle over via flashing blue emergency lights. The driver of the vehicle, later identified as Mr. Davion Pringle, refused to pull over. The officer continued to alert Mr. Pringle via emergency lights and siren. Mr. Pringle still refused to pull over, and changed lanes multiple times. Mr. Pringle did not slow down, nor did he speed up. He continued to drive southbound on Highway 49 at approximately 55mph for three miles. During that time Mr. Pringle passed by no less than four well-lit areas along Highway 49. At the same time, additional law enforcement officers from the Concord Police Department, Cabarrus County Sheriff’s Office, and NC State Highway Patrol responded to the general area of Highway 49 to assist the officer and intercept the fleeing vehicle, driven by Mr. Pringle.

The Sheriff’s deputy used an unknown object to break the driver’s window. In response to the deputy’s actions, the officer unlocked the driver’s door and opened it. Mr. Pringle eventually stepped out of the vehicle, under his own power, and was placed into custody without further incident. Mr. Pringle was not aggressively removed from the vehicle. Aside from the deputy breaking the window, no force was used at any point during the arrest, and fortunately no one was injured, despite Mr. Pringle’s unlawful and dangerous behavior.

Mr. Pringle was taken to the Cabarrus County jail and was charged with Resist Delay Obstruct (misdemeanor) and Failure to Stop for Blue Lights/Siren (misdemeanor). He was given a warning for failing to display a registration plate and failing to carry vehicle insurance.

Contrary to the assertion made by Oak Legal Group, PLLC, Mr. Pringle was not targeted or singled out. Mr. Pringle was operating a vehicle on a 4-lane divided state highway in violation of the law, and the officer was justified in pulling him over. Mr. Pringle had multiple opportunities to pull over to a safe, well-lit area. He chose not to do so. Mr. Pringle’s actions of refusing to pull over, reaching around and under his seat, and refusing to obey lawful, straightforward, and easily understandable directions escalated the situation to an unreasonable and unsafe level. Mr. Pringle jeopardized his own safety, that of his passenger, and that of the numerous law enforcement officers who had to quickly respond to the area.

Also contrary to Oak Legal Group’s allegation, there was no “later determination” to justify the stop; the Concord police officer knew the reason for the stop before he turned his blue lights on. The Concord officer had no way to know who was driving the vehicle, and certainly did not know the driver’s race or gender at the time the traffic stop was initiated. Attorney Harris admits the traffic stop was initiated on a “dark county road” and asserts that Mr. Pringle fled from the police in order to get to a “well-lit area.” Mr. Pringle was not observed until the officer and deputy approached the vehicle on foot at the Shell gas station.

The passenger of the vehicle, Ms. Grier, was handcuffed and briefly detained for two minutes for officer safety reasons during the stop. She was not charged or cited. No force was used against her. Her phone was never confiscated and she remained on a phone call with Ms. Baxter from the time she exited the car through the duration of the stop. In fact, the officer assisted her in communicating their location to Ms. Baxter so she (Ms. Baxter) could respond to the scene.

Following the arrest of Mr. Pringle, the Concord Police Department received a complaint from Ms. Baxter and Ms. Grier. Their complaints are actively under investigation. The Concord Police Department takes all allegations of employee misconduct seriously. All complaints are subject to a thorough and rigorous investigative process. Accordingly, the department will not make any further public statements about the active personnel investigation at this time.

Oakhurst Legal’s statement obtained by WCNC Charlotte claims Pringle pulled over to the gas station to ensure he had a safe interaction with law enforcement since the stop was started along a dark rural road. They also said police had no reason to believe Pringle was a threat. The statement says Baxter also was “severely damaged” by what happened.

The full statement from Darlene Harris, the attorney from Oakhurst Legal, follows:

Davion Pringle, Imani Grier, and Malissa Baxter have retained Oakhurst Legal Group Law, PLLC, Attorney Darlene Harris to represent them concerning a violent act of police misconduct from Cabarrus County Sheriff Department and Concord Police Department on August 27, 2021, for an alleged minor traffic infraction. Sheriff Deputies of the Cabarrus Sheriff Department and officers with the Concord Police department, without justification, singled out a car driven by Mr. Pringle around 10:45 pm. Given the location, a dark country road, Mr. Pringle slowed down and pulled into a gas station to ensure a safe interaction in a well-lit area.

Given the numerous examples of dangerous and hostile interactions between law enforcement and Black men, Mr. Pringle intended to ensure safe interactions with law enforcement in a place well lit. As seen in a viral TikTok video, officers from Cabarrus County Police Department and the Sherriff’s Office approached the vehicle with their guns drawn. Officers then shattered his window and aggressively removed him from the vehicle. Law enforcement officers later determined that their justification for Mr. Pringle and Ms. Grier’s detention was an alleged minor traffic violation — improperly displaying a license plate. He never posed a danger to officers, nor did he have any outstanding warrants for his arrest. Additionally, the Officers here had no reason to believe he was armed or dangerous. Simultaneously, and without reason, Officers and Sheriff Deputies placed the passenger, Ms. Grier in handcuffs and confiscated her phone when she attempted to record the incident and contact family members of her and Mr. Pringles.

Ms. Grier remained in cuffs until Mr. Pringle was removed from the scene. Ms. Baxter, Mr. Pringle’s mother later arrived at the scene. She was severely damaged by the events that took place as she attempted to secure the release of her son from a violent and unlawful search and seizure. We are fortunate that this incident did not have a deadly outcome as we have seen in similar captured interactions. This is likely due to Mr. Pringles’ safety precautions. If officers behaved this aggressively in a well-lit area with witnesses, how would they have reacted in an isolated and dimly lit area? We must hold the officers involved accountable for their actions. Mr. Pringle, Ms. Grier, and Ms. Baxter—victims of police—are trying their best to cope with the incident and continue to process the aftermath of this incident.

Out of respect for Mr. Pringle, Ms. Grier, and Ms. Baxter, please direct any further inquiries about this matter to Darlene Harris at Oakhurst Legal Group, PLLC.