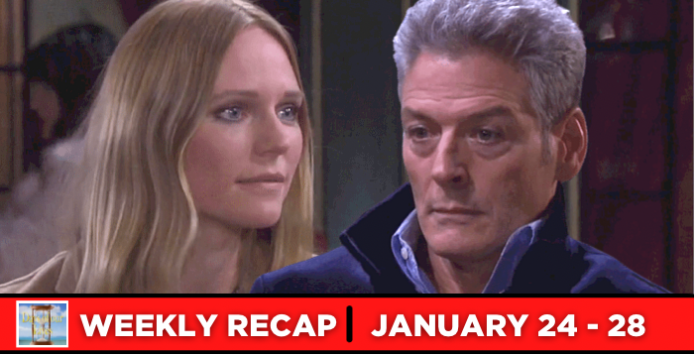 Days of our Lives Recaps: Confessions, Threats, And Promises

The Days of our Lives recaps for January 24 – January 28, 2022, feature an audacious kidnapping plot, multiple marital maelstroms, several miscarriages of justice, and so much more.

Chanel Dupree DiMera (Raven Bowens) tells Allie Horton (Lindsay Arnold) that her mother caught the two of them in flagrante. Allie relays the kiss she witnessed between Johnny DiMera (Carson Boatman) and Gabi Hernandez (Camila Banus). This spurs Chanel into agreeing to Paulina Price’s (Jackée Harry) suggestion that she take Johnny to the cleaners in a divorce settlement.

A possessed Johnny continues to make amorous advances on a disinterested Gabi. She and Jake DiMera (Brandon Barash) attempt to convince “Johnny” to cast his lot with them.

Nicole Walker (Arianne Zucker) arrives at chez Hernandez and is put out to discover that she’s alone with Rafe Hernandez (Galen Gering). They consider the fact that Ava might be testing them. Nevertheless, Rafe pulls Nicole in for a kiss!

Gwen knocks Abigail unconscious before she can summon the authorities. Ned Grainger (Chris Kalhoon), the mercenary pilot on Kristen DiMera’s (Stacy Haiduk) payroll offers to help Gwen and Ava with their problem – for a steep price…Chad DiMera (Billy Flynn) frets at Abigail being incommunicado. His search for her leads him to Xander Cook (Paul Telfer). Xander poo-poos the theory that the Sarah he spoke with was a masked imposter.

Melinda Trask (Tina Huang) tasks Shawn Brady (Brandon Beemer) with investing the allegations of abuse of power against Rafe. Rafe and Nicole ponder the possibility that Ava is responsible for his current predicament. Rafe confesses his love and desire for Nicole. Shawn interrupts the pair and places Rafe under arrest.

EJ DiMera (Dan Feuerriegel) is chagrined to hear that Chad and Abigail have accused him of assaulting the latter. He insists to Belle Brady (Martha Madison) that he did no such thing.

Chloe Lane (Nadia Bjorlin) eavesdrops on her father assuring his, “honey,” that he misses them…Film producer TR Coates (William Christian) descends upon “Johnny” and demands he makes good on his promise to deliver Possessed: The Marlena Evans Story…Marlena (Deidre Hall) pays Paulina a visit and apologizes for her behavior while under Satan’s thrall…Abe Carver (James Reynolds) avails himself to a distraught Chanel…Paulina and Abe have an awkward cross. Afterward, Paulina runs into TR and recognizes him as Ray, her former (abusive) paramour.

Nicole and Ava pointedly size one another up…Paulina makes clear her disdain for TR, and she warns him to give her and her family a wide berth. Lani Grant (Sal Stowers) chances upon the pair…Shawn agrees to act as temporary Commissioner of the SPD…Craig Wesley (Kevin Spirtas) confesses to Chloe that he’s cheating on Nancy Wesley (Patrika Darbo) with a man. Nancy decides that she and Craig will remain in Salem for the foreseeable future.

Xander proposes to Gwen…Abigail awakens on DiMera island and finds herself the unwitting guest of an armed Kristen. Upstairs, Sarah stares plaintively out of a window…EJ is sentenced to 10 years in Statesville. Belle successfully convinces him not to go on the lam…Johnny apprises Chad of TR’s threat…Paulina warns Lani against associating with TR…Chad contacts Abigail’s parents and realizes that she’s not with them as previously believed.

Days of our Lives (DOOL) airs weekdays on NBC. Check your local listings for airtimes. For more about what’s coming up in Salem, check out all the latest that’s been posted on DAYS spoilers, and for an in-depth look at the show’s history, click here.