In his latest appearance on “Museum of Broken Relationships,” rapper DinDin reveals how he is able to spot K-Pop idols who used to date.

Recently, rapper and TV personality, DinDin, made a guest appearance on the September 29 broadcast of the KBS Joy how, “Museum of Broken Relationships,” where he revealed a interesting thing about K-Pop idol couples.

During the show, the hosts and guests talked about the dating lives of K-Pop idols. Seunghee, a member of Oh My Girl, was asked how she would react or what she would do if she happened to meet her ex-boyfriend while on a show together.

Responding with an awkward smile, Seunghee said, “Well, I wouldn’t really know as I have never really experienced it myself.”

IN CASE YOU MISSED IT: Oh My Girl Seunghee Reveals What Sort of Hate Comments She Receives the Most following Her Debut

(Photo : KBS Joy via SBS News)
DinDin reveals how he spots K-Pop idols who dated and broke up

She then shared what she would probably do in that case. “But I don’t think I will leave my waiting room except for when we have to go shoot, and I will probably look down as I was as well,” Seunghee said.

While on the topic, DinDin joined in and revealed one of the ways he can tell if two idols dated and broke up with each other. “It is actually pretty easy to spot idol couples who have broken up with each other,” DinDin said.

He then explains how they act around each other on shows. “When shooting for a show with them, they would be really awkward at first. They wouldn’t even look at each other, you know,” DinDin reveals.

YOU MIGHT BE INTERESTED IN: 8 K-Pop Autumn Songs Perfect for Cozying in to Add to Your Playlist 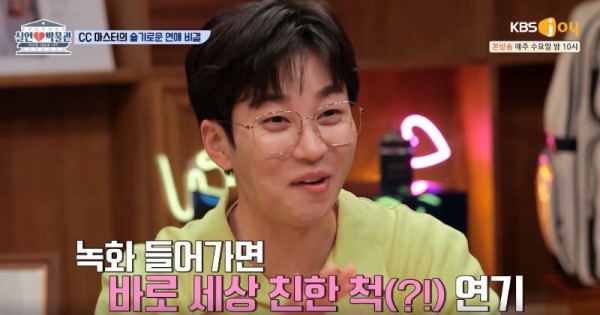 (Photo : KBS Joy via SBS News)
DinDin reveals how he spots K-Pop idols who dated and broke up

He continued, “But once the cameras start to roll, they will be like, ‘Oh, hi! It is so nice to see you!’ They act like the best of friends. Then when the shooting ends, they will turn awkward with each other again.”

DinDin adds that if K-Pop idols act differently from how you usually know them to act during shooting, then it is 100 percent because ex-boyfriend or ex-girlfriend is right in front of them.

DinDin then reveals that he actually likes to observe idols who figure out who dated who. “It is fun trying to spot idol couples who have broken up whenever I am shooting with a lot of K-Pop stars. I look around everywhere to try and find some clues,” DinDin said.

Meanwhile, DinDin released his single, “I Should Not Have Loved You,” featuring Buzz’s Min Kyung Hoon, back on July 19.