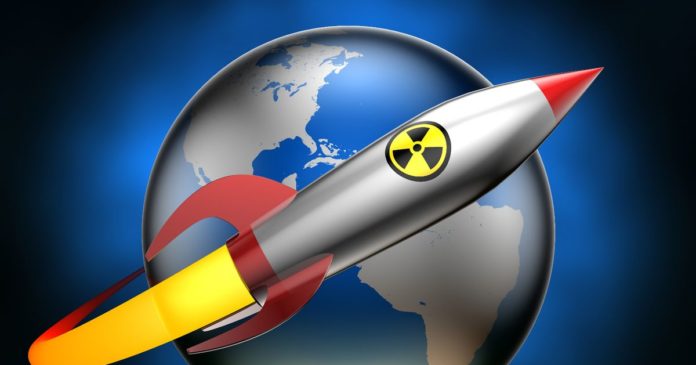 A new study has come up with an interesting hypothetical idea of how we could stop a large asteroid if it were heading towards Earth.

Influenced by Netflix film Don’t Look Up, a team of scientists from the University of California has decided that the best course of action to protect Earth would be to launch as many nuclear missiles at it as possible.

The team was headed by professor of physics Philip Lubin.

He told The Sun: “(The report is) a serious attempt to look at whether humanity has reached a point where we could prevent what happened to the dinosaurs 65 million years ago.

“What we point out is that we easily possess enough nuclear devices to take apart a large object like the one in ‘Don’t Look Up’.

“Our nuclear arsenals are designed to essentially threaten other nations – but those same devices could be used to protect us.

“In the case of a 10km asteroid, you’re talking about an existential threat that’s going to kill billions of people.

“You can say ‘but, I’m really worried about the radiation [created by a nuclear defence strategy]’, but (you will) also just die.

“It’s the nature of our natural world that we get hit by comets and asteroids because there are many around,” he said.

“There are big things out there that, if they did hit us, it would be catastrophic.

“On the other hand, there are a lot of smaller things out there, some of which are of similar size to the Chelyabinsk meteor, which are not existential threats, but they could potentially kill a lot of people.”

According to armscontrol.org, as of November, 2021, the UK has 225 nuclear warheads in stock, while America has an astonishing 5,550.

Israel has around 90 of them, and North Korea possesses about 40 to 50 – although they could be hiding far more that we will never know about due to it’s secretive nature.

For more stories and breaking news from the Daily Star, make sure you sign up for one of our newsletters here.