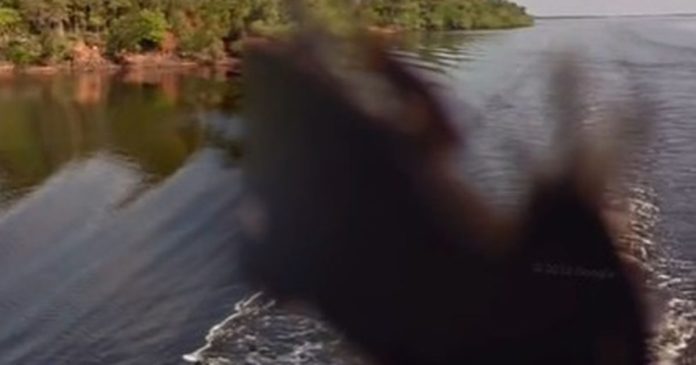 A Google Maps user has spotted the bizarre moment one of the Street View cameras was attacked by a frog.

TikTok user googlemaps.fai uploaded a video of the strange sighting, screen recording as they dropped the pin down.

The video was captioned: “I found it!!”, followed by a single frog emoji.

The Street View camera appears to be shooting from a boat, and as the user spins it around the silhouette of a frog appears front and centre.

The critter is far too close to the camera to be able to tell what species it is, but the distinctive curled legs and arrow-shaped head of a frog are clearly visible.

Looking up the coordinates on the TikTok reveals that the snap was taken near Manaus in the centre of Brazil.

The boat is travelling down the Rio Negro river, which joins up with the Amazon just a few kilometres away.

The clip has now been watched over 7,000 times with several TikTok users spamming the comments section with laughing-crying emojis.

Another TikTik user jokingly asked: “What is this app?”

This comes after eagle-eyed Google Maps users caught a randy couple romping on the hood of a car.

The bloke was snapped with his pants part of the way down as his partner was bent over the hood of the silver car in front of them as they had pulled over for sex in the sunshine on Dukes Highway in Keith, South Australia.

The images which were initially taken in 2013 have resurfaced on Reddit this morning in the subreddit r/googlemaps shenanigans.

The original poster, u/DuhC0mmunity, who has received 162 upvotes said: “I found where these images were from.”

And in true forum fashion, the couple were mocked by Reddit users praising them for pulling over first.

One user said: “At least they were being safe and pulled over!”

Another added: “No shame!”

A fourth added: “Lmao I must have driven past that spot 8-9 times driving between Adelaide and Melbourne.”