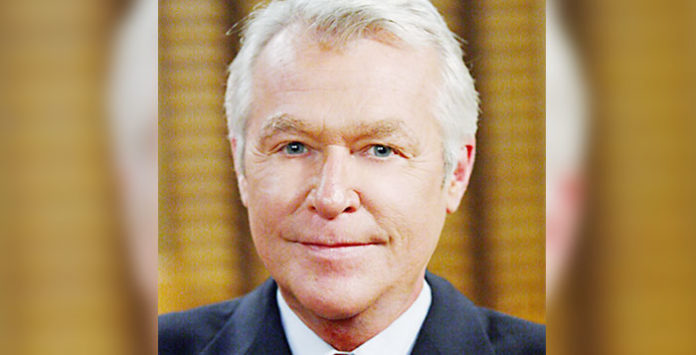 Jerry verDorn, beloved as Ross Marler on Guiding Light and Clint Buchanan on One Life to Live, passed away on Sunday, May 1 after a battle with cancer. The actor was 72 years old.

Born Gerald M. verDorn on November 23, 1949, in Sioux Falls, South Dakota to the late Jake and Janice verDorn, Jerry verDorn grew up in various parts of South Dakota, Minnesota, and North Dakota according to Dignity Memorial.

He set out to become an English teacher after graduating from what is now called Minnesota State University Moorhead, but verDorn gravitated towards the performing arts, landing big roles in numerous stage shows. He spent a year in London studying acting. Later, he moved to New York with his wife Bethea “Beth” Stewart.

After amassing some stage credits, he was discovered by late GL casting director Betty Rea. The actor joined the cast of the CBS soap in March 1979 as attorney Ross Marler, Roger Thorpe’s (Michael Zaslow) attorney when he was charged with marital rape.

“Jerry and I started on Guiding Light on the same day,” Elvera Roussel, who played Hope Bauer on Guiding Light, tells Soap Hub. “He had entire courtroom scenes with many pages of courtroom dialogue and all I had to memorize was ‘Grandma, I’m home!’ From the first day I met Jerry, I just knew he was the best. He and I would travel together, promoting the show on weekends. We jokingly referred to each other as ‘weekend spouses.’ I’m glad I was able to see him at his charity benefits in more recent years.”

“My heart is broken and filled with profound sadness and bittersweet love for Jerry and his family,” Keifer posted on Facebook. “Thank you for being my friend – it was an honor and privilege to be yours. Rest well, Dear Jerry. You are loved beyond measure.”

Starting in 1995, verDorn won two consecutive Daytime Emmy Awards for his role as Ross on GL. The actor was a mainstay on the beloved soap opera throughout numerous regime changes. In addition to defending Roger on marital rape charges, Ross worked on and off in the district attorney’s office prosecuting Jennifer Richards (Geraldine Court) for the murder of Lucille Wexler (Rita Lloyd).

Ross defended Billy Lewis (Jordan Clarke) for the attempted murder of Kyle Sampson (Larkin Malloy). He prosecuted Reva Shayne Lewis (Kim Zimmer) for the death of Annie Dutton’s (Cynthia Watros) unborn child but when it became clear that Annie was lying, Ross jumped into defense attorney mode to cross-examine Annie, who broke down on the stand and confessed Reva was not responsible.

After being released by GL (Ross was killed off in a plane crash — though viewers always hoped for his return), verDorn joined the cast of OLTL in 2005 as Clint Buchanan, ex-husband of Victoria Lord (Erika Slezak). He remained with that show until its finale in early 2012 and reprised his role as Clint for the brief Online Network revival of OLTL in 2013.

“Grant Alexander [Phillip Spaulding] called me yesterday with the news,” shares his former co-star, Michael O’Leary (Rick Bauer). “I’m still so sad, I feel like I could cry at any moment. Jerry was a leader among men, he was the personification of class and character. He was the unifier between us and management. He was our present day Bert Bauer, if I can say such a thing.

“He was the leader of our show and a leader for a reason,” O’Leary continues. “He did the speeches for our Christmas shows and Thanksgiving because that’s who Jerry was. Jerry was the personification of kindness at all times — to everyone. He always approached people with openness, kindness and we became very close. I looked up to Jerry, got advice from him.

“The last time I saw him was in Crystal Chappell’s [Olivia Spencer] web series, Venice, where we played two goofballs who were handymen at this haunted house,” O’Leary adds. “He looked me and said, ‘This is probably the last time I’ll be doing something like this.’ That was a year and half ago. That was the last time I saw him. My heart goes out to Beth and the rest of the family.”

The beloved actor stayed in touch with daytime fans through appearances on the YouTube talk show The Locher Room, hosted by former GL publicist Alan Locher and through his charity benefit Stars and Strikes. GL favorites would join the actor for an afternoon of bowling and fun with fans to support various charities including the American Cancer Society and Autism Speaks.

He is survived by his wife Beth; his sons and daughters-in-law Jake and Laura verDorn and Peter and Erin verDorn; his sister Bonnie Simpfenderfer and brothers Jim and Dan; several nieces, nephews, and cousins; and three treasured young grandchildren: Benjamin, Nora and Penelope.

A private memorial celebration will be held at a later date this summer. In lieu of flowers, contributions in Jerry’s memory can be made to the American Cancer Society, Autism Speaks, the Actors Fund, or a charity of choice.