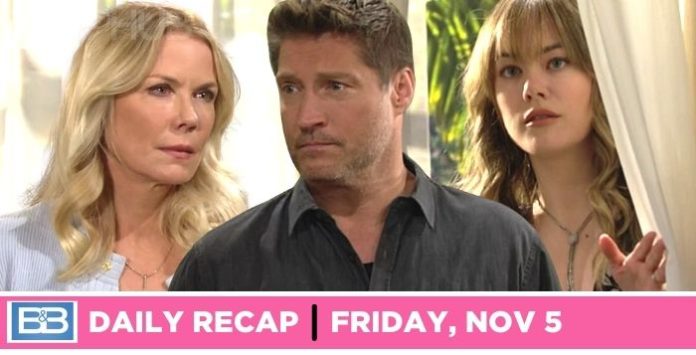 The Bold and the Beautiful recap for Friday, November 5, 2021, features Deacon Sharpe blowing up his plan with Sheila Carter, Hope Spencer getting Brooke Logan Forrester to reminisce about the past before begging her mom to forgive her dad, and Ridge Forrester and Liam Spencer deciding to protect their wives.

The Bold and the Beautiful Recap Highlights

Deacon (Sean Kanan) and Sheila (Kimberlin Brown) argued about their plan. Deacon had serious doubts about their pretending to be a couple. After all, that’s not the key to becoming one big happy family with Hope (Annika Noelle) and John “Finn” Finnegan (Tanner Novlan).

It seems that Deacon realized his association with Sheila did him no favors with Hope and Brooke (Katherine Kelly Lang), which made Sheila furious. Ultimately, Sheila declared Deacon and Brooke would never happen (never say never, Sheila), and she tried unsuccessfully to stop him from leaving.

Hope took Brooke to task over her attraction to her dad. Brooke admitted that she felt a strong pull toward Deacon at one time, but despite the sweetness and tenderness they shared, it’s hopeless now. Nevertheless, Hope wants Deacon in her life and plans to give him a second chance.

Deacon and Sheila, as a couple, didn’t fool Ridge (Thorsten Kaye). He doesn’t trust the con artists. Liam (Scott Clifton) and Ridge planned to protect their loved ones from the dangerous cons. Liam and Ridge decided that the smart women they’re with can’t defend themselves from Deacon, so they decided to shield them from him instead. That’s sure to go over well with Brooke and Hope.

The Bold and the Beautiful Recap: A Delusional Declaration

Deacon went to Brooke’s and declared he was done with Sheila. However, Brooke didn’t believe his dramatic change of heart. He apologized for everything, but Brooke asked him to leave. Instead, he passionately made his case to be a part of their grandchild’s life, but his words didn’t convince Brooke.

Brooke told Deacon he had no reason to dream about a life together. He reminded her of Hope, declaring their daughter the best version of them both. Ultimately, Deacon thanked Brooke for raising their daughter alone, but now he deserves to be part of the whole thing after all these years. Hope overheard and found her father’s pleas sincere. So she begged Brooke to let him make amends.

The Bold and the Beautiful (BB) airs weekdays on CBS. Check your local listings for airtimes. For more about what’s coming up in Los Angeles, check out all the latest that’s been posted on B&B spoilers, and for an in-depth look at the show’s history, click here.