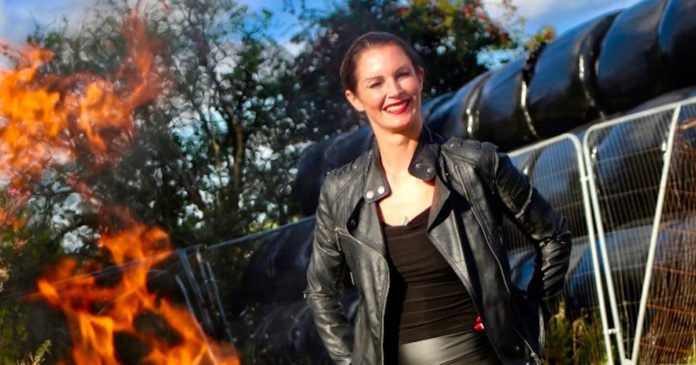 Nicola White, 38, from Manchester, split from her husband back in 2021, and posed for photos in the dress before it was put in a barrel and went up in flames as she watched on

A woman who ripped and burnt her wedding dress after filing for a divorce says it was an empowering experience.

Nicola White, 38, shared the moment she set her white frock alight on camera during a ‘wreck the dress’ photoshoot.

The 38-year-old, who works as a private assistant, married her ex-partner back in 2005 and says the pair filed for divorce during the summer of 2021.

Nicola, from Manchester, shared images from the shoot, including her tearing the dress with her hands.

She said: “It was very cathartic to do, and I felt very empowered after it. The whole day was so much fun, we went to a farm to do it.

Get the news you want straight to your inbox. Sign up for a Mirror newsletter here

She ripped the dress before it was burnt
(

“We took photos of me wearing the dress, and then I took it off so we could take a few pictures of it in the dirt and everything.

“After that I tore up some of the lining and layers in it, which was really fun.

“Then at the end it went in this barrel and I set it on fire! We took loads of pictures of that and they came out great.”

Nicola described the photoshoot as an empowering experience

She said: “The best part was setting fire to it, it was so satisfying! I enjoyed tearing parts of it up.

“I felt like a weight had been lifted off me and I took out all the anger I had in the shoot. Now I can leave the past in the past.”

Nicola found the opportunity to do the shoot over social media.

Nicola said: “A photographer posted on Facebook about another woman who had done one, and asked if anyone was interested.

“All my friends were tagging me because I had just separated from my husband, saying I should go for it, so I did!

I have never done a photoshoot in my life, so I didn’t know what to do.

“I told Jenine, my photographer that she’d need to tell me how to pose and everything because I didn’t know what to do.”

She added: “The marriage broke down despite everything I did to try and save it.”