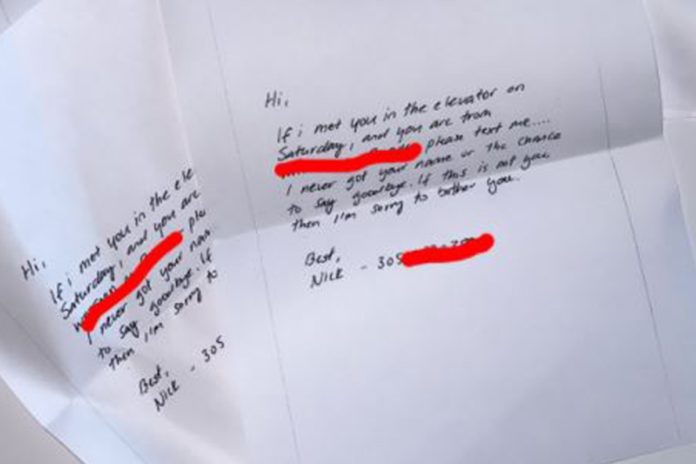 A WOMAN has revealed how she was left horrified after a man she met in a lift decided to post a note under every door in her apartment block to ask her out on a date.

Layah Heilpern, from Leeds, now lives in Miami, Florida, and said she was left ‘creeped out’ after the older man tried a bizarre tactic to find her.

Layah Heilpern, a bitcoin expert, said she was innocently talking to a man, believed to be in his 50s or 60s, in a lift in her apartment block and thought nothing of the conversation as she made her way to her home.

However, she was stunned to receive a note from the man days later and was even more creeped out at finding out he has photocopied the letter to every room on her floor.

She told the Daily Star: “I didn’t think anything of him in the lift.

“He must have been around 50 or so I thought the age difference implied that I wasn’t romantically interested.

“I thought the letter was really creepy, and I don’t know exactly how he knows which part of the building I live in, which is weird.

She met the man on the lift four days before the note came under her and her neighbours doors after a brief chat with the man in the lift.

Layah wrote on Twitter: “Unfortunately I’m friendly so I will speak with anyone.

“We got chatting and turns out we’re from the same part of London. He then gets out on his floor.

“We keep speaking the doors close abruptly ending the conversation.”

Layah also shared pictures of the note and several others given to her by other people living on her floor.

She was left stunned about how the man found out where she lived in the building, which is also a hotel, that Layah lived in.

The note, which shows the man’s name as Nick, reads: “Hi, if I met you in the elevator on Saturday, and you are from (blank) please text me…

“I never got your name or the chance to say goodbye.

“If this is not you then I’m sorry to bother you.”

Layah asked her followers whether they thought the gesture was romantic or whether they would call the police.

Many users said the note was ‘desperate’ and ‘creepy’ while others said it was borderline harassment.

In other news, check out the one item this woman found in her boyfriend’s car which has convinced her he’s cheating.

Plus, people can’t believe the size of my baby, people say he looks like a full-grown man.

Meanwhile, a woman spent hundreds on her boyfriend’s Christmas presents only to find out he’s not buying her any.

FABULOUS BINGO: GET A £5 FREE BONUS WITH NO DEPOSIT REQUIRED