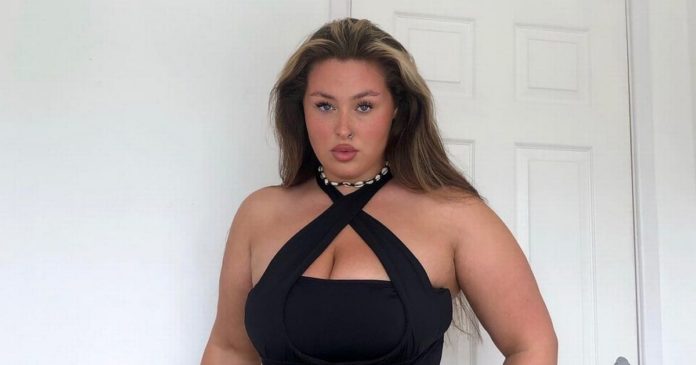 Holly Marston, 22, uses her TikTok account to dispel damaging stereotypes about plus-size women – including that “skinny” girls shouldn’t think they’re “safe” to leave their boyfriends with her

A stunning plus-size woman who loves her figure has warned “skinny” girls that she’s a threat to their relationships.

Social media star Holly Marston said girls “think they’re safe” letting their boyfriends chat to her because of her size.

But Holly has warned the nasty stereotype that bigger girls are less attractive doesn’t ring true – and that men adore her curvy figure.

The voluptuous 22-year-old from Manchester has nearly 300,000 followers on TikTok and Instagram, where she shows off her figure in different outfits.

She recently posted a video on TikTok claiming women just assume she’s not a threat and that their boyfriends won’t be attracted to her.

The caption reads: “When a skinny girl assumes her boyfriend is safe with you bc you’re fat.”

The clip, which has been viewed thousands of times, has struck a chord with people who agree with the point she makes.

One person commented: “It’s so awkward not all guys BUT guys are guys and if they see an opportunity they will go for it.”

While some people took offense to Holly’s video, she clarified in the comments that she wasn’t being serious.

She wrote: “Obviously this was just a joke to say that people shouldn’t think different of plus size people we are valid and attractive too.”

And Holly’s fans didn’t need to be convinced of her attractiveness, gushing over her hair and make up and asking her to do tutorials.

Holly, who has received 1.7 million likes on her videos overall, writes in her bio: “Ur hot at any size.”

In the past, she’s used TikTok to slam women who wear smaller clothes sizes and complain they are “fat.”

In one video she writes: “Me to people who say I feel so fat and ugly in front of me when they’re literally a size 6” before confirming, “I hate you.”