While most 10-year-olds are playing Minecraft, riding bikes, or watching YouTube videos, Justin Sather is intent on saving the planet. And it all started with a frog blanket when he was a baby.

“He carried it everywhere,” Justin’s mom tells us. “He had frog everything, even a frog-themed birthday party.”

In kindergarten, Justin learned that frogs are an indicator species – animals, plants, or microorganisms used to monitor drastic changes in our environment. With nearly one-third of frog species on the verge of extinction due to pollution, pesticides, contaminated water, and habitat destruction, Justin realized that his little amphibian friends had something important to say.

“The frogs are telling us the planet needs our help,” says Justin.

While it was his love of frogs that led him to understand how important the species are to our ecosystem, it wasn’t until he read the children’s book What Do You Do With An Idea by Kobi Yamada that Justin-the-activist was born.

Inspired by the book and with his mother’s help, he set out on a mission to raise funds for frog habitats by selling toy frogs in his Los Angeles neighborhood. But it was his frog art which incorporated scientific facts that caught people’s attention. Justin’s message spread from neighbor to neighbor and through social media; so much so that he was able to raise $2,000 for the non-profit Save The Frogs.

And while many kids might have their 8th birthday party at a laser tag center or a waterslide park, Justin invited his friends to the Ballona wetlands ecological preserve to pick invasive weeds and discuss the harms of plastic pollution.

Justin’s determination to save the frogs and help the planet got a massive boost when he met legendary conservationist Dr. Jane Goodall. 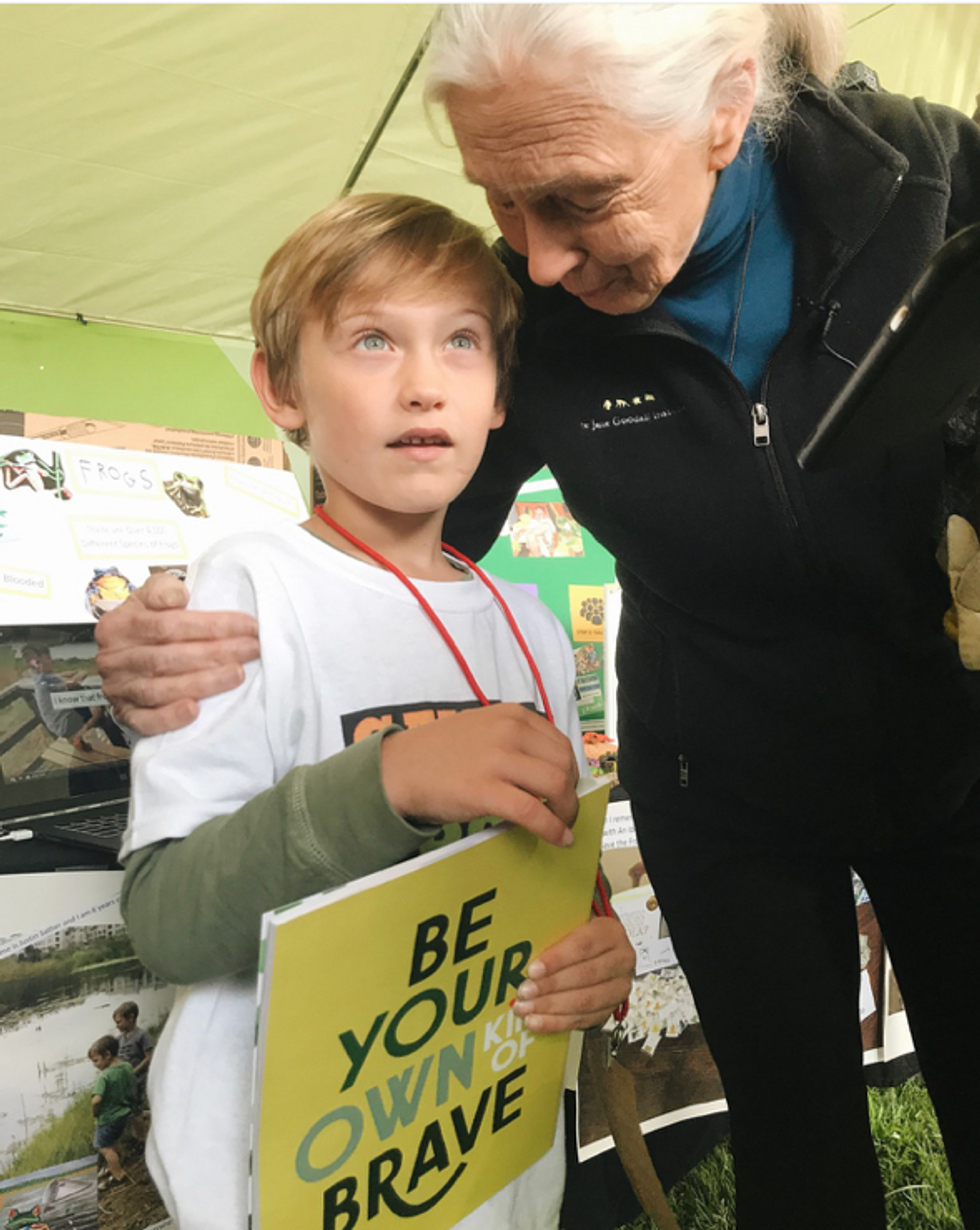 At one of her Roots and Shoots youth initiative events, Dr. Goodall was so impressed with Justin’s enthusiasm for helping frogs, she challenged the young activist to take it one step further and focus on plastic pollution as well. Justin accepted her challenge and soon after was featured in an issue of Bravery Magazine dedicated to Jane Goodall.

In the following months, Justin learned how to turn fishing line into bracelets, transform plastic bags into doormats, recycle crayons, and shred plastic to make bowls. For him, turning trash into treasure became a thing of magic. He even collected 200 pounds of plastic caps, and transformed this trash into a buddy bench for his school. 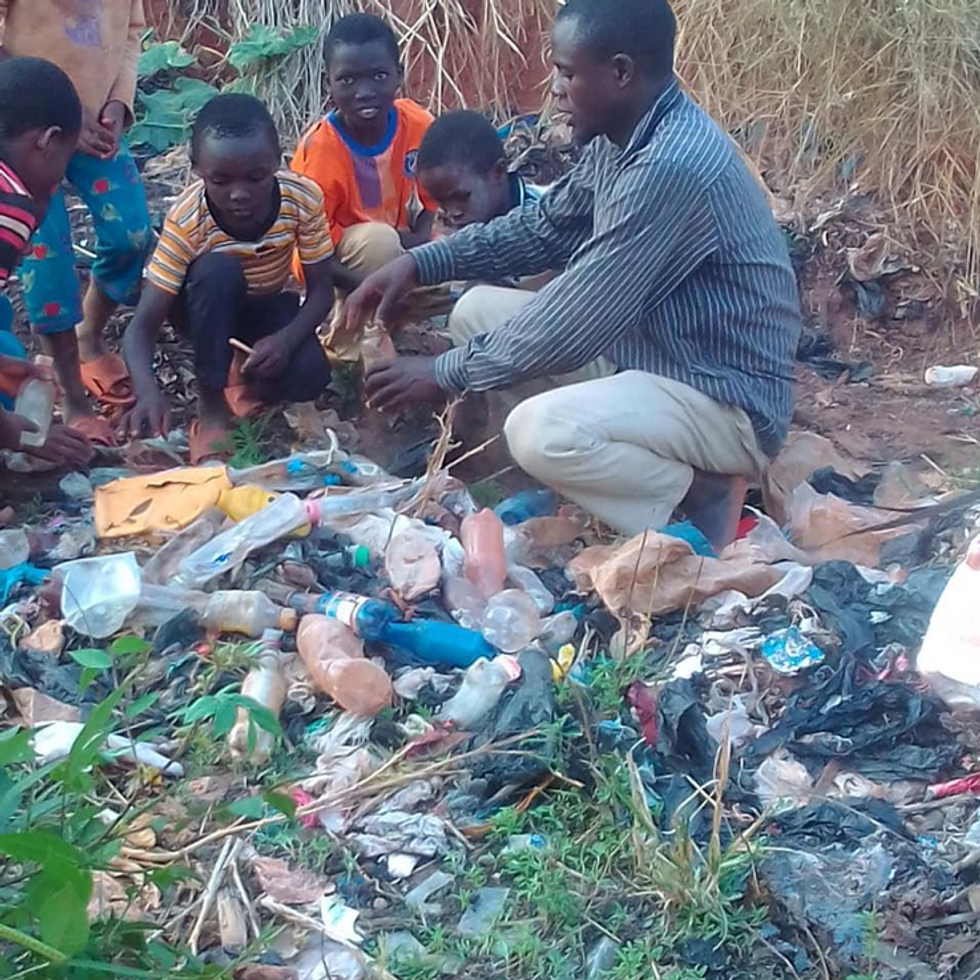 On Earth Day 2019, Perise Foran, an environmental science student from Cameroon reached out to Justin asking for help. Justin saw that the streams where Perise lived were overflowing with plastic garbage, and quickly agreed to help his new friend. The two of them started off with a plan to transform the 8,000 plastic bottles Perise collected on a World Litter Run and had been sitting in his yard for over 6 months.

According to Reuters, every minute, a million plastic bottles are bought around the world. And according to PlasticOceans.org, every minute, a full garbage truck’s worth of plastic is dumped into our oceans. Upon learning those facts, Justin further strengthened his resolve.

He started asking everyone he was connected to for suggestions on what could be done with Perise’s stockpile of bottles. Soon, creative upcycling ideas began pouring in from all around the world. Justin completed the projects with family and friends in the United States, and encouraged Perise to do the same in “parallel” in Cameroon. That’s when Justin’s Parallel Projects GoFundMe was created. Its aim is to raise awareness about water quality, find creative solutions to the plastic pollution issue, educate people to move away from single-use plastics, and inspire youth to become eco-heroes.

One might think that Justin had his hands full with all these projects… but he didn’t stop there.

This summer, Justin’s dream of visiting the rare and exotic frogs of Ecuador’s Choco Cloud Forest came true with the Reserva Youth Council. Through his land conservation GoFundMe, and with generous donations from the Rainforest Trust, Old Navy, and the public, Justin purchased 30 acres of land which protected habitat for critically endangered species that were at risk from logging and ranching. 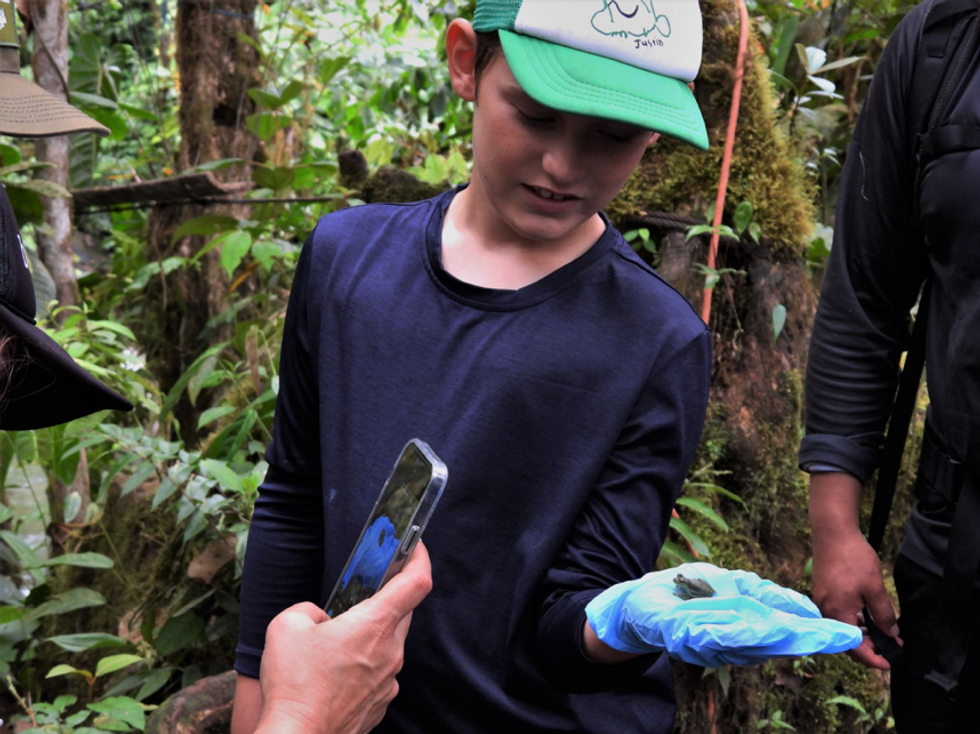 Through a separate Reserva Youth Council initiative, Justin’s goal now is to collect a million letters from young people like himself to send to world leaders with the aim of protecting 30% of the planet by 2030.

For anyone looking to help the planet Justin suggests to “start off small, take chances, and be brave.”