In the days leading up to the 2020 Democratic Convention, Dr. Jill Biden reintroduced herself to the nation after serving as the Second Lady during the Obama administration. On Twitter, she reminded everyone that “Teaching isn’t just what I do. It’s who I am.”

The statement was a bold proclamation of her priorities when she was on the cusp of becoming the First Lady of the United States. Her continued commitment to being an educator while holding one of the most high-profile positions in the world may seem extreme to some, but it’s something every teacher understands.

Teaching is not what I do. It’s who I am.

I’ll be giving my convention speech tonight from my former classroom.

Dr. Biden has kept up that commitment since moving into the White House. Last year, during the pandemic, she taught her classes virtually. But now she’ll return to her classroom at Northern Virginia Community College, where she has worked since 2009.

But that doesn’t mean America will be without a First Lady during the school year. She will continue to perform her duties as First Lady and will travel on days she isn’t scheduled to be in the classroom.

“There are some things you just can’t replace, and I can’t wait to get back in the classroom,” she told Good Housekeeping magazine.

Dr. Biden’s return to work shows her commitment to education but it’s also historically important. She is now the only First Lady in the position’s 231-year history to have a full-time job outside of the White House.

“It shatters the norms of what first ladies do,” said Randi Weingarten, president of the American Federation of Teachers, according to the Associated Press.

“She will really be bringing the role of first lady into the 21st century,” First-Lady historian Katherine Jellison told USA Today.

“Americans have historically wanted their first ladies to be in the White House and at the president’s side whenever possible,” Jellison said. “Maybe the time has come when Americans will be more accepting of the idea that a president’s wife can simultaneously be a first lady and a working professional.”

Dr. Biden’s decision to continue her career is a great example for women, too. It shows that even if your spouse has the most important job in the world, you can — and should — have your own life outside of their shadow. 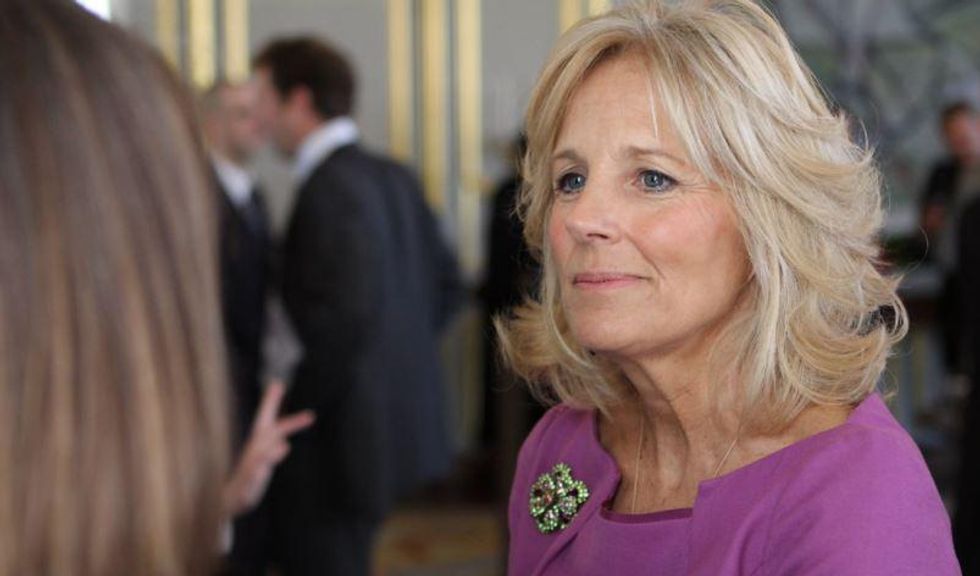 Her decision to return to work is also a way for her to show the value of educators. Teaching is too important for her to give up in exchange for a role that, at times, can be ceremonial and perfunctory.

“If we get to the White House, I’m going to continue to teach,” she said before the 2020 election. “I want people to value teachers and know their contributions and to lift up the profession.”

Dr. Biden shared why a teacher’s job is so important in a recent op-ed she wrote for Time magazine.

“Educators, always remember that right now, someone out there is a better thinker because of you. Someone is standing a little taller because you helped her find the confidence she needed. People are kinder because you showed them what that meant,” she wrote. “Your strength and resilience, your creativity and kindness, are changing lives and changing the world.

Dr. Biden’s decision to work shows that Americans have come a long way in their expectations of a First Lady. Hillary Clinton was greeted with scorn back in 1992 when her husband was running for president. Many thought it was improper for the then governor’s wife to be working as a lawyer.

“I suppose I could have stayed home and baked cookies and had teas,” she said. “But what I decided to do was pursue my profession, which I entered before my husband was in public life.”

At the time, her comments were seen as a major gaffe that dogged her for years. But now, they show how strong women like Clinton have changed the role that women can play in public life.