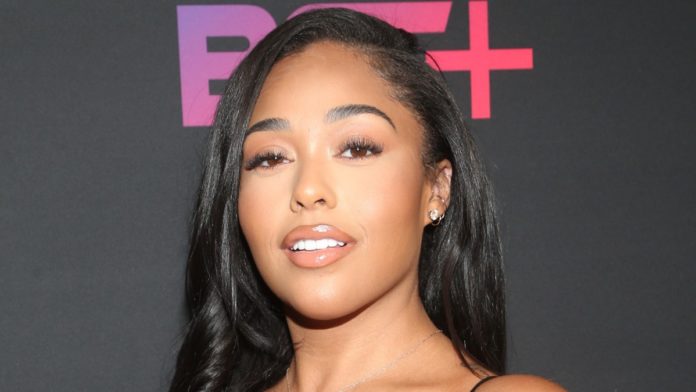 Jordyn Woods stuns in Dior as she enjoys a night of fashion with her boyfriend, Karl-Anthony Towns.

Eli Russell Linnetz, the founder of ERL, helped design the Dior 2023 collection at a star-studded showcase in LA.

Woods, alongside her NBA partner, donned outfits from the fashion house with the socialite and model wearing a minidress.

Woods wore a burgundy Dior mini dress with white pumps and an assortment of diamond jewelry.

The 24-year-old also shared a video in the dress with the iconic Hollywood Hills in the background.

“praying on my downfall don’t make you religious ❤️,” she wrote in the caption.

She showed off her new hairstyle with her dark roots contrasting blonde highlights. She pinned her hair back for a curly tendril updo for a ’90s inspired look.

The social media influencer also shared an Instagram post at the Dior event, thanking the fashion house for the invite:

In the final slide, Jordyn shared a photo with her NBA boyfriend wearing a Dior shirt under a grey sweater, matching joggers, and black leather shoes.

Last month Jordyn Woods shared an emotional tribute to Towns on the anniversary of his mother’s death.

She shared a photo of the pair hugging after he played a game for the Minnesota Timberwolves, and wrote the following:

“This moment was so special to us because today is the 2 year anniversary of Jackie passing and I know how tough it’s been doing all of this without her ❤️ so proud of you @karltowns … it’s deeper than basketball!!”

Karl-Anthony lost his mother, Jacqueline Towns, to COVID-19 in April 2020. He also lost six family members to health issues related to the virus.

The NBA star joined the Facebook series, Peace of Mind with Taraji, and opened up to hosts Taraji P. Henson and Tracie Jade about dating Woods after the death of his mother.

“A woman that meant so much to me in my life left my life to be replaced by another woman who took that spot,” Karl-Anthony said about his girlfriend, per Yahoo.

He went on to reveal that he was best friends with Woods and said she supported him emotionally after his mother died.