YouTuber Ask A Mortician reacted to the bizarre request, saying it was ‘their kind of vibe’

It’s not unusual to start thinking about your funeral plans early to ensure that you’re prepared – after all, burials can be expensive.

But what is unusual, is when Kris Jenner talks about buying wall mausoleums and testing out coffins in a Keeping Up With The Kardashians episode.

Reality TV can be crazy at times, but YouTuber Ask A Mortician is “not surprised” by their extravagant burial plans.

Caitlin Doughty, an American mortician, owns a funeral home in Los Angeles, and was asked by her subscribers to react to episode seven of season 14.

She explains at the start of the video that she once had a meeting with Bunim/Murray, the production company for KUWK, about a potential crossover.

The crossover would have been planning the Kardashians’ funeral, and although Bunim/Murray loved the idea, it didn’t happen. 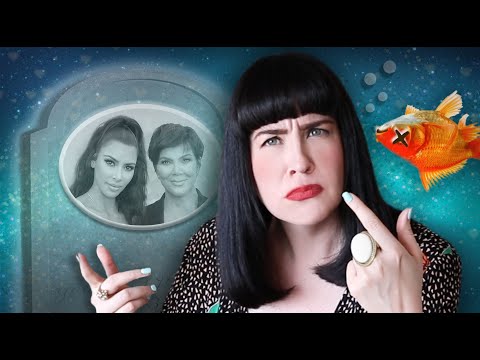 Ten months later the episode ‘Tales From The Kardashian Krypt’ aired, with a very similar concept.

At the start of the episode Kris speaks to her mother about end-of-life planning, which Ask A Mortician “loves.”

Ask A Mortician responds: “I’m not sure if this is entertaining television watching a family talk about their end of life plans, but I tell you what, I like this representation and normalization on television.”

When sat around the table with family, Kris addresses the situation in a more serious manner, and says: “I really want to work out with this entire family about what we would ever do if somebody passed away.”

Rob Kardashian responds: “I thought you meant a group work out.” which Kim and Khloe find humorous.

In response to her mother, Kim Kardashian says: “What’s the right decision? You get in a coffin, you get in the ground, what do you want me to do?

“What colour do you want? Tempur-pedic? What kind of pillow tops?”

Ask A Mortician believes Kim’s reaction is a classic defence mechanism for an uncomfortable situation.

She said:” Just confronting someone about a corpse, a body or your death is not going to be pleasant for them, you have to take multiple inroads.”

Khloe also doesn’t appear to take the matter too seriously, as she refers to buying plots as ‘funeral biznass’ and says to her mother: “Let’s get some commissions on those plots baby.”

Later on in the episode, the Kardashians take a trip to the famous Hollywood Forever Cemetery in Los Angeles, which Ask A Mortician gets very excited about.

Kris tells her children that she wants to buy plots in the cemetery, and even looks at mausoleums with burial rooms for over 28 people.

Ask A Mortician reacts by saying: “That wall for 28 people is millions of dollars worth of future corpse cupboards.”

Kim and Khloe seem to like the idea of a mausoleum, and even suggest that they want their own lake and moat surrounding it.

“We want a moat so no one can steal our bodies,” says Khloe.

Ask A Mortician responds: “You’re probably expecting me to say they should consider a green burial or composting, and most families I would.

“But the Kardashians, a huge marble faux mausoleum at Hollywood Forever by the lake, just obnoxiously huge, it’s kind of the vibe for the Kardashians.”

As the episode comes to a close, they visit a business that creates custom coffins, and we see Kris “test one out” and get comfortable.

Subscribers seemed to enjoy the slightly morbid Kardashians episode, with many admitting this is the first time they’ve ever watched an episode.

Ask A Mortician finishes the video by saying: “Other than the intensity of the kids being upset by mum’s death planning, I think it’s a good conversation planner, it’s not too bad.”

For funeral notices in your area visit
https://funeral-notices.co.uk/