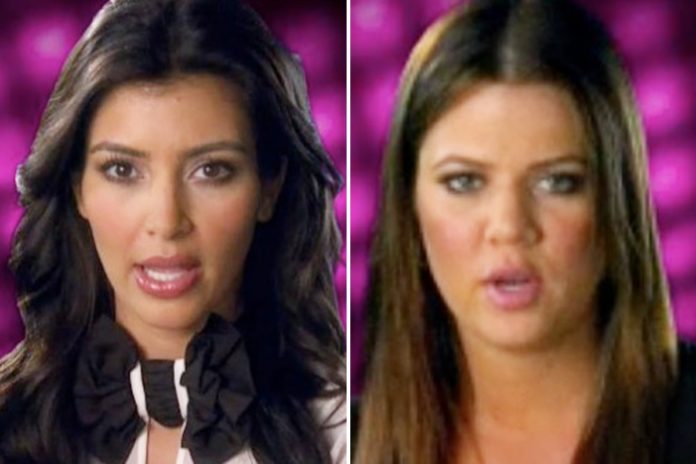 FANS were shocked at how different Kim Kardashian looked in old KUWTK clip of her sister Khloe going to jail.

The reality star was nearly unrecognizable in the resurfaced video from earlier years of the show compared to her appearance today.

A Kardashian fan account on TikTok shared the clip of the family preparing for Khloe’s few hours stay in jail following her 2007 DUI arrest.

Khloe’s original punishment was community service, but was cited for violating her parole after missing several sessions due to her busy schedule.

She instead was sentenced to 30 days in jail, but ended up only serving less than a day.

Ahead of leaving for the police station, the snippet first pans to Khloe getting her hair curled by her BFF Malika Haqq.

She opened up about her feelings in a confessional interview saying: “Today I’m going to jail and I just wanna get it over with and never have to worry about it again.”

The camera then pans to her momager, Kris Jenner who informs her daughter that the media are staking out the station awaiting Khloe’s arrival.

“This is kinda serious,” Kris says anxiously while looking at her watch.

Kim then gave her thoughts on the situation explaining: “I think all of us just are trying to be as calm as we can be for Khloe.”

The scene continues with all the girls accompanying Khloe on the drive to serve her time as a nervous Kris considers breakfast plans at IHOP before making the final drop-off.

Kim then proceeds to take pictures of herself with her digital camera claiming: “We need the effect on everyone on what we’re doing,” as both Kim and Khloe poke fun at the situation.

The whole gang supported Khloe once they arrived at the police station ignoring paparazzi who snapped pictures of the moment.

Fans, however, were less focused on Khloe’s stint in jail and more on the girls’ changed appearance since the over a decade-old episode aired.

While a second person replied: “bruh khloe literally had a natural bbl”

Others agreed pointing out Kim’s evolutionary style and facial features since first appearing on the show.

One poster, in particular, caught the eye of fans, as Kim, 41, and her sisters posed for hardware store Sears.

In the image, the trio looked completely unrecognizable, prior to their plastic surgery and photoshopping ventures.

The KKW Beauty founder posed smiling with her hand on her hip, wearing a black and white patterned dress and plain black heels.

However, her facial shape looked much different, as her long dark locks fell past her shoulders.

The reality star rocked light brown hair and showed off her famous curves, though appearing astronomically different than her current slim, blonde, look.

Kourtney, 42, took the left side of the photo, smiling brightly with her hands on her hips.

The TV personality sported a light pink flowy dress paired with a cheetah blazer and black patent leather pumps to tie it all together.

The mother-of-three wore her hair long and wavy as she joined her sisters for the shoot.

The girls promoted their former Sears’ fashion line ‘Kardashian Kollection’ in the ad, a collaboration that took place between 2011 and 2015.

Redditors were shocked at both how different the girls looked, but also at how extreme the editing was for the campaign.

“Wtf…,” one wrote simply, while a second remarked: “Kourtney and Khloe’s faces deeply unsettle me for some reason…”

“That doesn’t even look like Kourtney it’s insane,” another agreed.

“Some of these are genuinely terrifying,” a fourth trolled.

Another commented: “The photoshop on their faces was so unsettling, it hardly looked like them.”

“The Sears poster is awful. The hunched posture and giant hair makes them look like little trolls. So weird. This was fun to see though, such a different time,” one added.

While the girls have moved on to other endeavors since the show first debuted, they haven’t stepped away from reality TV just yet.

The family’s new Hulu series is expected to air sometime in early 2022, featuring most of the Kardashian-Jenner clan.

According to a source, this new show is going to be an “entirely different concept” from what fans are used to and will not only focus around the family, but also around Kim’s journey as a lawyer and Kourtney’s newest engagement.

“The new show is going to have the entire family be part of it, but Kim, Khloé, Kourtney and Kris [Kardashian] are going to be on it the most,” a source told Us Weekly.

Kourtney and her fiancé Travis Barker’s engagement will also be a big storyline as it was revealed their engagement party was filmed for the new show.