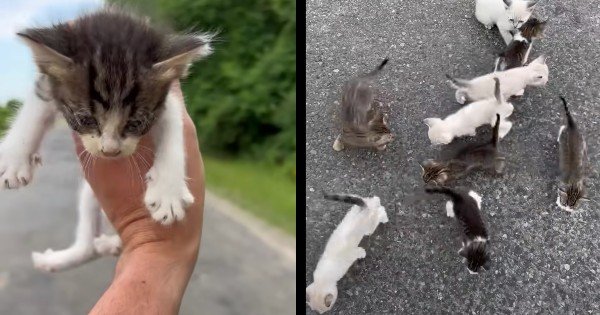 One man thought he was rescuing a kitten on the side of the road until he was ambushed by 12 more baby kittens looking for help!

The man who filmed the video and rescued the kittens is Robert Brantley. When he stopped while driving back to his home in Louisiana, he thought that a baby kitten was stranded all by himself near the road. But soon, he was completely surprised by all the fluffy cuties that came out of the grass to meet him. Talk about a kitten mob! How adorable!

He is clearly surprised and unsure in the video as to what to do with the large number of kittens. But Robert decided that he had to save them and took them back to his family’s home.

“Wasn’t ready to take them but couldn’t leave them for dead either,” he said. “So, I loaded them up and brought them home where we’re working to get them healthy and get a good home.”

The 13 kittens are now safe and happy on Robert’s farm with his family. He says that his two kids adore the kittens, and they are all trying to get them adopted to new homes.

Robert has taken to Instagram to share updates about the kittens. And he even posted a video of them getting their first bath at the farm. What a sweet sight!

Thank goodness Robert was on that road when he was! Because of his actions, all of those precious kittens are now safe and will be able to find happiness in their new homes soon.

WATCH: Man Saves 13 Kittens On Side Of Road

LISTEN: Doctors Ignore Patient Until She is Fighting For Her Life | Kids Helped Elderly Man Get Off The Bus