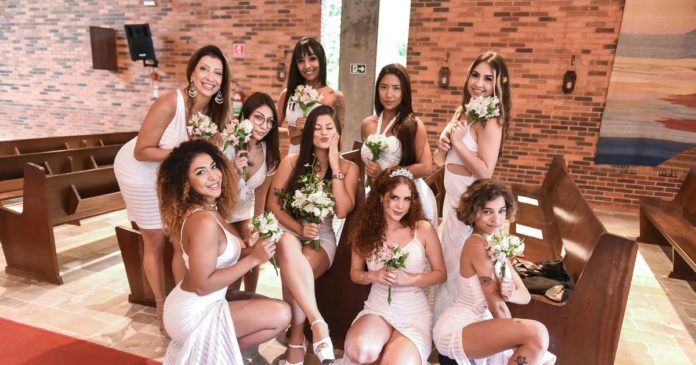 Brazilian model Arthur O Urso and his wives want to expand their family with a baby on a ‘first come, first served’ basis after one of his partners left the unusual arrangement

The women who have all married the same man (

A man who had nine wives plans to have children and says it’s ‘first come, first served’ as to who will be their mother after one partner left the marriage.

Brazilian model Arthur O Urso made headlines last month after saying he wanted to marry two more women despite having a sex rota to keep his wives satisfied.

But after one of his partners left, Arthur hopes to expand his family with a baby.

Arthur and his first wife Luana Kazaki, are swingers who formalised the union with the other women at a Catholic church in Sao Paulo.

But the marriage is not legally binding as polygamy is illegal in Brazil.

Having given up the “sex rota” when it began to feel like a chore, Arthur said he did not mind which of his wives – whom he practices “free love” with – conceived a child.

“The cool thing about all this is that regardless of which of my wives has the baby, the child will grow up with a lot of love and affection from everyone,” Arthur told Jam Press.

“I don’t have a favourite wife for this to happen, we’re letting it happen naturally.”

The octet have differing feelings about motherhood, according to Arthur, with some not yet keen to have children.

Arthur O Urso during his wedding ceremony to his 9 wives. Circled is the wife who left
(

Others however, are thrilled about the prospect of welcoming a baby to the group.

“I can’t hide that I’m very anxious, they are all keen for it,” he said.

“I believe that after the first child comes and the others see the whole situation, they will definitely want to feel and experience the same.

Arthur O Urso with some of his wives
(

The polygamist has taken to sharing his unconventional lifestyle to his more than 100,000 Instagram followers.

Photos show him cuddled up in bed with his wives or on group outings.

He has previously spoken about the struggle to balance the needs of his many wives, and said he was still “learning” about the unusual partnership.

Arthur also confirmed that one had decided to leave the marriage.

Arthur relaxing with some of his wives
(

“A few months went by and everything seemed so perfect, until the moment when one of my wives called me to talk,” he added.

“In short, we came to the decision to divorce.

“I felt sad and confused, she commented that she missed a monogamous relationship.

“I felt cheated, but sooner rather than later. Now I have eight wives. I will not be hasty again.”