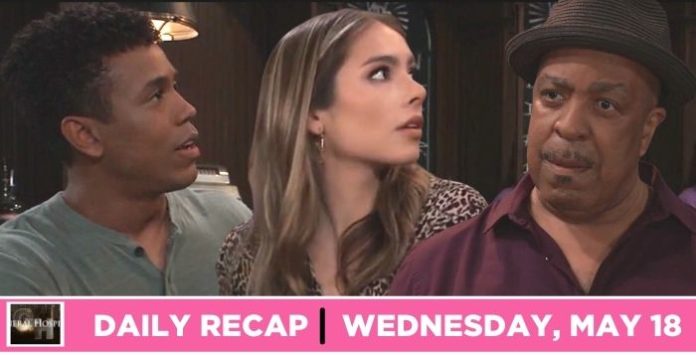 The GH spoilers recap for Wednesday, May 18, 2022, features TJ Ashford and Molly Lansing Davis taking a trip downstate to Brooklyn to find someone who walks right up to them.

Molly (Haley Pullos) and TJ (Tajh Bellow) settled into a bar in Brooklyn to meet the man who owned the music store where Marshall Ashford (Robert Gossett) had his clarinet fixed. The man told them he repaired the instrument, but he could not tell them where to find Marshall. He did give them another lead and TJ couldn’t wait to tell Curtis Ashford (Donnell Turner) when he called. Curtis had already told Portia he was going to join Molly and TJ on their search for his father after the talk he had with Stella Henry (Vernee Watson).

When Molly and TJ decided to go have a fancy dinner and mused that maybe they would see Marshall playing music somewhere, the man himself walked right into the bar and spotted them.

Gladys Corbin (Bonnie Burroughs) got Photographer Felty (Brian Norris) to delete the pictures of Sasha Gilmore Corbin (Sofia Mattsson) with the pills. He even told her the deal was he would get Sasha more pills, but Sasha later denied it and said he deserved his memory stick back because it was his property.

She then admitted to using drugs again but swore she stopped and she wasn’t using when she hit Harmony Miller (Inga Cadranel) with her car. Gladys wanted to tell Brando Corbin (Johnny Wactor) about Sasha’s drug problems, but she swore to her she’d be fine. Gladys said she knew addiction didn’t work that way, but the women apparently made a deal.

When Gladys and Sasha went to see Brando at the garage, where he was fixing Sonny Corinthos’s (Maurice Benard) classic car and telling him what trash Michael Corinthos (Chad Duell) is, Sasha announced Gladys was moving in with them.

Brook Lynn Quartermaine (Amanda Setton) and Harrison Chase (Josh Swickard) were shocked to see her old manager, Linc Brown (Dan Buran), at the Metro Court Gardens. He claimed he owned the rights to the song Ned Quartermaine (Wally Kurth) and Chase just sang, but Brook Lynn didn’t think that was true. When he told her there were big names interested in recording her songs, he said if she signed another contract and went back to his hotel room, she’d find out.

That’s when Brook punched him before Chase ever got a chance. She later admitted to Chase she did the punching so Chase could go back to work soon and not have his suspension extended. Brook also confessed she never read the fine print in her contract and Linc might very well own her songs.