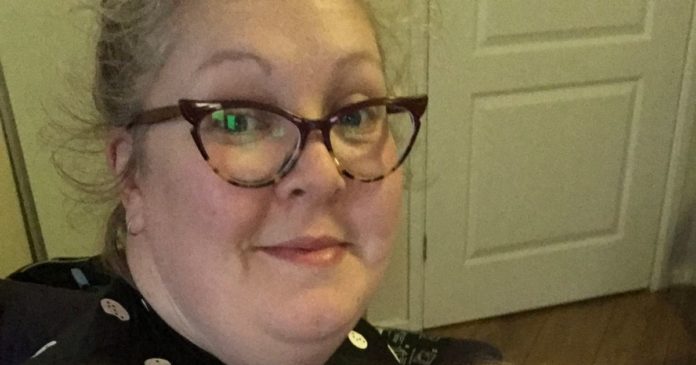 Tannice Hemming used to suffer with binge eating, but she turned her life around after she was told to get off a ghost train because she was too heavy

A mum-of-three has shared her incredible weight loss journey after dealing with a lifetime of eating disorders.

She has now lost 10 stone, despite being pregnant, thanks to a wake up call which happened when she tried to get on a ghost train with her daughter.

Tannice Hemming, 36, from Maidstone, Kent, used to suffer with binge eating, self-sabotage and an overall loss of identity as a result of trauma which she experienced during her teens.

She says she became dependent on food, and she soon began ‘packing on the weight’, and at just 19, she weighed 21 stone.

Tannice suffered from a slew of health issues, such as a lack of energy, joints hurting whenever she walked and her thoughts were controlled by food.

The mum decided to lose weight after a wake up call

The ride attendant struggled to put the barrier down, and as a result she was asked to get off the ride
(

Get the news you want straight to your inbox. Sign up for a Mirror newsletter here

After becoming a mum, she realised that her health was at risk and that she might not be around to see her children grow up if she continued the way she was going.

Soon, her fears were confirmed as she suffered a blood clot during her second pregnancy.

“I started forming blood clots in my lungs, where I became incredibly ill and had to stay on a high-dependency unit for 10 days,” Tannice said.

“I almost died and since then, I was terrified about ending up with more health problems and leaving my family behind.

“After my [teen] trauma, I used food like people use drink – except food was always there and I didn’t have to be a certain age to buy it.

“I had a pretty healthy diet otherwise, as my mum would make sure I had a nutritious meal of typically meat and vegetables for dinner.

“Soon, the weight became hard to ignore, as well as my difference in attitude, and we argued about my habits.”

In August 2012, she met her husband, Jacques, 36 and in January the following year, they matched on OkCupid.

As the two decided to start a family together, they were pleased to find out they were having a baby girl, Sienna, now six, who was born in February 2016.

However, upon multiple consultations with the obstetrician, Tannice claims that she was subjected to discrimination due to her weight – she was told at every appointment about terrible outcomes.

Upon reaching her “tether” with it all, she tried to seek help from different clinics – but claims she was turned away from each one and received no help as a result.

As she wanted to release the “tyranny of binge eating” that was controlling her every thought, she decided to book herself in for gastric bypass surgery.

Tannice will now wear a bikini on the beach
(

Tannice is much slimmer now

Tannice said: “I wanted to be treated better by society, healthier and there for my kids as they grow.

“I was having doubts prior to my surgery, but these were solved after we took a trip to Southend with the kids.

“I asked my daughter who she wanted to go on the ghost ride with and she chose me – so we hopped on board.

“However, the ride attendant struggled to put the barrier down and asked us to get off the ride because of this.

“I understood, as this was for our safety – but I could see the people queuing and looking at me, although no-one made a fuss.

“I felt this was the ‘cherry on top’ as it cemented my decision to have the surgery, just as I was about to embark on my pre-diet.”

Initially, she couldn’t see the changes, but she soon started to have an aversion to the food she once loved – she now says she hates cakes and ice cream.

Tannice looking much slimmer with her family
(

Tannice has a much healthier diet now
(

She said: “I can’t eat a Mr Whippy or cakes as they taste vile to me and I still have chocolate left over from Easter.

“I love marmite now and will only eat three meals a day with limited grazing.

“A few months later, I was running around and had the ability to feel free with how much I exercised.

“I felt the biggest change psychologically, as my confidence was boosted with each stone that shed every month.

“I was able to express myself in the clothes I wanted to wear and now, I wear colourful outfits instead of black.

Tannice now feels like she can wear more revealing clothes
(

“I fell pregnant with my third child five months after having surgery, which isn’t recommended.

“However, I looked into it and made a decision based off my personal attributes and I gave birth to a healthy baby boy, with no complications.

“During my check ups, I was told that I finally reached my ultimate goal – to have a healthy BMI.

“I reached this by the time he was born and I couldn’t have felt happier.”