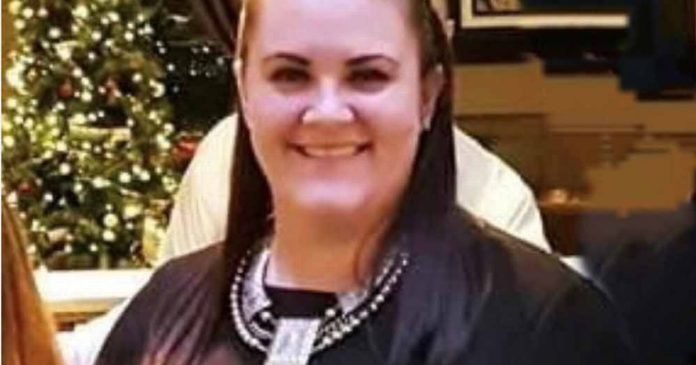 When Amy Woolliscroft went to watch a Derby County football match with her dad as a teenager, she was looking forward to a fun day out cheering on her favourite team.

But she was absolutely horrified when she couldn’t fit through the turnstile.

“Someone saw me struggling and called out that they’d open the gates which was so embarrassing, because I was just too big to get through the turnstiles”, she said. “Everyone around us saw and heard it.”

The traumatic event stayed with her for years, but she was still unable to shed the weight and hated how she looked.

The day nursery manager, who is mum to six-year-old Noah, said: “I wanted to make sure I was here for my son and that I was fit enough to run around with him. That was why I decided to do something about my weight.

She hated how she looked
(

Amy was a size 28 before her weight loss journey
(

“I always knew one day I would lose it. I just never knew when.”

Amy wore a size 28 at her heaviest and hated seeing her reflection, but was finally shocked into action by her festive photos from Christmas 2017 following months of comfort eating after a relationship ended.

With the support of her best friend, Lucy, 30, she joined a diet club online, started exercising in earnest and watched her waistline shrink until she felt like she had a “brand new identity.”

Now wearing a size 10-12 with a healthy BMI of 23.5, she said: “My real friends will tell me, ‘You were beautiful then and you are beautiful now.’

“Some people have said, ‘I always knew there was a beautiful face in there.’

“But I’ve not done this for anyone else, I’ve done it for me.

Amy with her son, Noah
(

“I’ve always been the ‘Big Girl.’ I wasn’t bullied at school, because I hung out with the popular girls, but when they all had boyfriends I didn’t.

“And I always hated PE and having to get changed in front of other people at school.

“Throughout my life, when I’ve looked in the mirror, I’ve hated what I saw, as I just didn’t love myself.”

Remembering how she and her brother were fussy eaters and refused to eat vegetables as children, Amy also realises now that her parents splitting up when she was nine accentuated her already unhealthy relationship with food.

She said: “My brother and I just ate crisps, potatoes, bread and sweets.

“After my parents split up, we lived with my dad and I remember stepping onto the scales in the bathroom for the first time when I was 15 and being horrified because I weighed 15st.

“It really hit home, because I knew my dad weighed 18st, so not that much more than me. ”

After leaving school, Amy trained in childcare at college and landed a job at a local nursery, where she worked for 11 years.

Amy had the support from her best pal, Lucy
(

Then, seven years ago, she moved to the nursery where she works now, saying: “I am very determined.

“Once I have made my mind up to do something, then I don’t lose that focus.”

And while she spent half of 2017 comfort eating, after splitting up with Noah’s dad in the May, she soon called on that gutsy determination to tackle her weight problem once and for all.

She said: “I’ve always had a big appetite, so I’m not sure whether it was comfort eating or just the fact I didn’t care much about my weight after Noah’s dad left.”

Whatever the reason, confronted with photos of herself at her 2017 Christmas celebrations, she was shocked into slimming with gusto.

Confiding in Lucy, a clothes and shoe shop assistant manager, she said: “We’ve been best friends since we were 10 and although we were chalk and cheese physically, we really love each other, so I knew she would support me.”

Too shy to go in person to a slimming club, instead she joined WW online and was soon off to a roaring start.

Noah asked her where her tummy had gone
(

And Lucy was there boogying alongside her when she started following hour long YouTube dance exercise videos.

Amy said: “We both love dancing and when we go out, that’s what we do … we dance, so it was the perfect exercise plan for me to start with.”

Each week Amy, who now restricts her calorie intake to 1,400 a day, weighs herself on a Sunday, which is also her ‘treat’ day.

Preferring savoury to sweet things, she will still forgo all snacks if her weight has gone up, so she can get back on track.

She said: “I know people are surprised by my determination, because they’ve seen there’s nothing I won’t say no to if it means keeping my weight healthy.

“As a result, I’ve only gained weight about five times since losing it and I’ve always managed to lose it again.

“A pizza is my all-time favourite food, but I will say no if I need to.

“Another thing that happens when you lose this much weight is your digestion changes, so you then have to be careful about what you eat.”

Luckily, exercising alongside her weight loss has also helped Amy to reduce the “apron effect” experienced by many people, who have had drastic weight loss and end up with large folds of loose skin.

She believes using a weighted hula hoop was key to toning up as the pounds fell away.

At first, she ended up with bruises to her hips and thighs when she used it but is now an expert and can keep the hoop circling around her waist for an hour at a time.

“When I started this, I couldn’t even run for a bus. Now, I run three times a week on my treadmill at home which is the equivalent of 15-20 miles each week.

Not only has her weight loss made her feel physically better, Amy says that psychologically, she feels far more positive.

“I can go into any clothes shop and wear anything I want now and when I look in the mirror, I like what I see,” she said.

“I’ve learned to love myself and although it sometimes still doesn’t feel real, I know that I’ve achieved this.

“People tell me I am an inspiration and that makes me so happy I want to cry.

“But even better, I can now race Noah across the field and run around with him in the park.”

Amy’s main advice to her 2,700 WW Community followers and people who follow her on Instagram – @ww_18_21 – is to never give up on their own weight loss goals.

She said: “If you have a bad day or a bad week or a bad month, just move on and start again.

“This, basically, says to anyone that ever doubted what I was capable of, that actually it is and was possible.”

As for Amy’s son, Noah, he just has one question for his mum.

Do you have a weight loss story to share? Email [email protected]