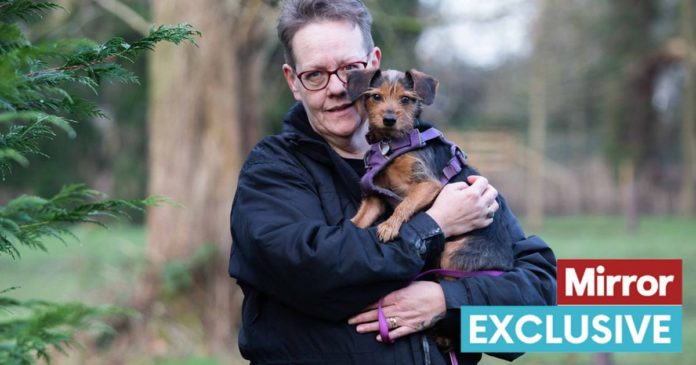 Yorkshire terrier Chewie was found tied up in a “shallow grave” and rescued by Loretta and Ray Whiteley, from Leyland, Lancashire – one year later he saved Ray’s life in return when he had a heart attack at home

A heroic dog has been nominated for Crufts Hero Award 2022 after he saved his owner’s life by jumping on his chest while he suffered a cardiac arrest.

Loretta and Ray Whiteley, from Leyland, Lancashire, rescued Chewie as a puppy, when he was found tied up with his paws and mouth taped in a “shallow grave”.

One year later, the faithful pup returned the favour by performing ‘CPR’ on Ray when he stopped breathing.

The tiny 4kg dog jumped up and down on Ray’s chest “with all his might” to keep his owner alive.

“Without Chewie, Ray would have died – and that would have been the end of my entire world,” Loretta told The Mirror.

The Kennel Club and Eleanor Riley)

Sign up to our TeamDogs newsletter for your weekly dose of dog news, pictures and stories.

Loretta, 56, and Ray, 55, adopted Chewie when he was 12 weeks old, after being found buried in a black bin bag in a stranger’s garden.

Chewie isn’t an official support dog but he has taken Ray, who has progressive multiple sclerosis, under his wing.

In 2018, Loretta was in the garden hanging out her washing when she heard Yorkshire terrier Chewie loudly barking inside.

“I dropped everything and went inside. Chewie was frantically bouncing on Ray’s chest and licking his face,” she explained.

One of the tricks Loretta and Ray had taught Chewie early on was to do ‘CPR’ on their other rescue dogs, Sheba and Messi – though they never thought he’d need to use it.

Loretta describes it as a “moment of surrealism” when she clocked Ray was having a heart attack in front of her eyes.

“I checked for a pulse and realised he wasn’t breathing,” Loretta recalled. “I thought he was dead.”

The Kennel Club and Eleanor Riley)

Loretta continued: “Chewie wouldn’t get off him but I dragged Ray onto the floor and did CPR on him while phoning for an ambulance.

“They were absolutely amazing and got here so quickly.”

Ray left the house with a defibrillator on his chest and spent the next five weeks in hospital.

“If Chewie hadn’t reacted the way he did, I would have missed it and Ray wouldn’t be here,” Loretta said.

Fortunately, there hasn’t been another situation like that since – though Chewie always keeps one eye on Ray.

“If Ray is breathing in a peculiar way, Chewie jumps on him and licks his face until he realises Ray is okay,” Loretta explained.

As well as saving his life, Chewie has given Ray a “second lease of life” and helped him regain his confidence.

The heroic Yorkie has also had a positive impact on others – helping Loretta raise over £5,000 for animal charities and pets in need.

Chewie has been recognised as a hero by Crufts
(

Loretta describes five-year-old Chewie as “absolutely bonkers” but says “he has a heart of gold”.

She couldn’t be prouder of Chewie for being nominated as a finalist for The Kennel Club Hero Dog Award 2022.

“I thought someone was pulling a prank – I screamed when I got the call,” Loretta said.

“For both of us, it means the world. We saved his life when we adopted him and now he’s saved Ray’s.”

Chewie has been nominated alongside four other outstanding canines.

Golden retriever Milo is a special guide dog who gave an ex-dairy farmer his life and family back.

Newfoundlands, Storm, Sonar, Bob and Walker, are being recognised for their unique water therapy for suicide prevention and front-line emergency services.

And golden retriever Ruby provides love and support to a young girl with cerebral palsy, helping her every day with pain, anxiety and stress.

The winner of The Kennel Club Hero Dog Award will receive £5,000 for the dog charity of their choice, with other finalists receiving a £1,000 donation to their chosen canine charity.

The Hero Dog will be revealed on Sunday 13 March in the Resorts World Arena at Crufts.

Do you have a dog story to share? Get in touch with us at [email protected]