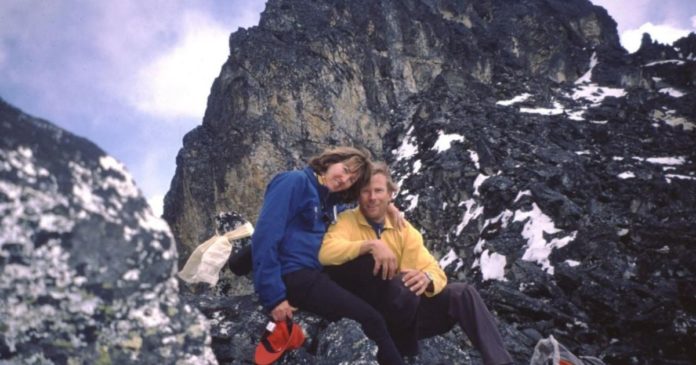 When alpinist Alex Lowe died in tragic circumstances in 1999 he left behind his devastated wife Jenni and three young sons – but when his best friend was on hand to comfort the family, Jenni found love again

Alex Lowe was considered one of the best mountain climbers of his time, scaling summits around the globe with his best friends.

He also had a thriving family life, married to wife Jenni and with three young sons, Max, Isaac and Sam.

In October 1999, Alex travelled to Tibet with his best pal and climbing partner Conrad Anker and cameraman David Bridges. Together, the group planned to scale the 8,000 metre Shishapangma mountain before skiing back down.

But tragedy struck when the three men were caught in an avalanche.

Tragically, 40-year-old Lowe and Bridges were killed in the natural disaster, which made it impossible to recover their bodies.

Anker, then 38, made it out alive but was wracked with guilt over being the only survivor.

When he returned to the US, Anker went to visit Alex’s family in the state of Montana to comfort them.

Recalling his grief, he said he and Lowe were like “brothers” after growing so close throughout their time climbing together.

After losing someone he loved so dearly, he wanted to do anything he could to honour Lowe’s memory and felt compelled to look after his family.

Before Lowe suddenly died, he told Anker he had plans to take his wife and sons to Disneyland to make memories.

Carrying out his wishes, Anker led the trip with Jenni and the boys – but shortly after they returned, sparks flew between Anker and Jenni. Soon, they began a romantic relationship.

Most expensive weddings after £15m Beckham bash – from Ecclestone to Kardashian

In April 2001, less than two years after Lowe’s death, the pair married in Italy with her sons by their side.

More than 20 years on the pair are still happily married and have told their story in new documentary Torn, which is streaming on Disney+.

Produced for National Geographic, the film has been shot by Lowe’s oldest son, who was 10 years old when his dad died.

Now 33, Max, who is the oldest of the three boys, admits he has struggled to accept Anker as part of his family over the years.

In the emotional film, Max asks his mum how she moved on so soon after his dad’s death with his best friend.

Jenni responds: “You can lose someone and still love someone else.”

After Jenni and Anker made their relationship public, rumours spread around the climbing community that the pair had been having an affair while Lowe was still alive.

But the pair brushed off the nasty comments and have been together for more than two decades.

Recalling how she fell in love with Anker, Jenni said she didn’t want to let the pain of losing Lowe stop her from feeling love again.

Throughout the film, Max is honest about his sometimes strained relationship with Anker, who adopted him and his brothers in the 2000s.

But he expresses affection for his stepdad towards the end of the film, telling him: “You’ve done as good a job as I could have ever imagined and we all really love you for it.”

In 2016, nearly 20 years after Lowe died, his body and Bridges’ body were discovered on the south face of the mountain by rock climber David Goettler.

After the bodies were discovered, Lowe’s family travelled to Tibet to have his remains cremated. When they returned to Montana they scattered his ashes at the top of a peak.

In the film, Jenni tells her son: “Alex is a lucky guy, in that, his best friend, who loved him, fell in love with me and each of you.”