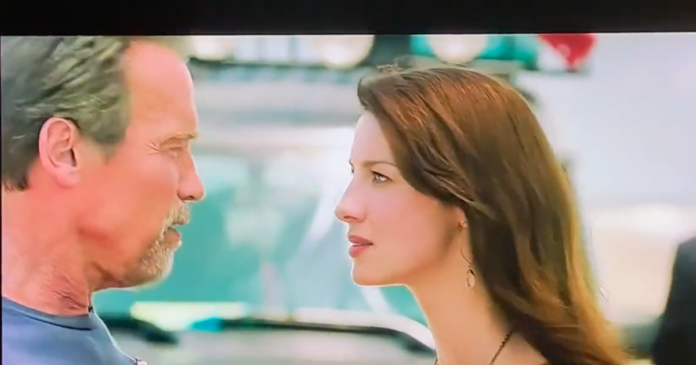 One fan had been watching the actor’s 2013 action thriller Escape Plan which Sylvester Stallone also stars in, when they noticed Caitriona appear in one scene as his daughter.

Taking to Twitter, sharing the short clip, they wrote: “And to think…many years ago when I first watched this film I had no idea who the beautiful actress was playing Arnold Schwarzenegger’s daughter. #CaitríonaBalfe.”

One replied: “What a super cool role for her early on…these two legends! She really did shine here.”

Another added: “Thank you for showing this! I haven’t seen this movie in so long. She said she was in it and it still didn’t click. Then when she called Arnold her dad, still nothing. How cool to share the screen with these two action giants!!!”

While one wrote: “I remember watching it when it first came out and wondering who the actress was playing Arnold’s daughter. I found her intriguing.”

Another said: “Who knew!”

And another commented: “Had no idea, thanks for sharing!”

The Irish actress really has come a long way since 2013, as she went on to play Claire Fraser in Outlander in 2014 but recently was even nominated for a BAFTA for her appearance in movie Belfast.

Caitriona was nominated for her role in Belfast for Supporting Actress but lost out to West Side Story actress Ariana Debose.

However, the movie as a whole won Outstanding British film at the BAFTA awards and the 42-year-old was over the moon.

Taking to Instagram, she said: “So proud of all our cast, crew and producers on this fantastic honour!!! Thank you @bafta and thank you Ken for bringing us all on this magical journey.”

Picking up his award on the night, Kenneth Branagh was chuffed that his semi-autobiographical family drama was recognised.

Accepting the award, Branagh said: “Thank you to British cinema audiences for watching in tonnage a UK and Irish cinema film at UK and Ireland cinemas.

“All hail the streaming revolution, but all hail the big screen too. It’s alive, and long may they live together.

“This is a black and white film about the Troubles. It was not an easy pitch, but when the great talent in this room dreams up anything similarly unlikely to make or to finance, please remember if you build it, they will come.