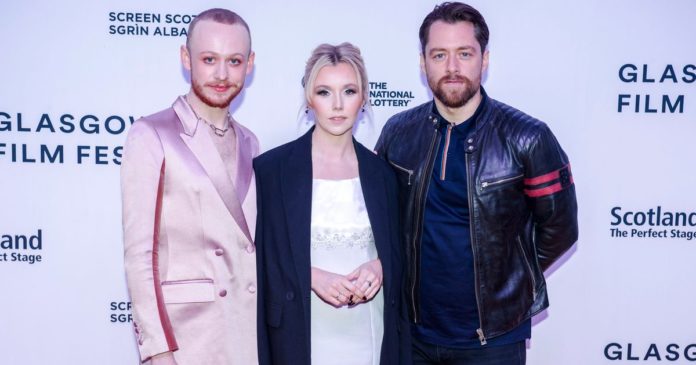 This evening, The Glasgow Film Festival showed a very special early preview of the first episode of Outlander season six and some of the cast turned out on the red carpet.

Lauren Lyle, Richard Rankin, John Bell and newest member of the cast Joanne Thomson put on their best gladrags for the event which fans had to queue for tickets on the day.

Our Showbiz Correspondent Bev Lyons was on the red carpet speaking to the cast about what we can expect from season six.

Richard Rankin was in high spirits as he was the first to step on the red carpet, wearing a leather bomber jacket and polo shirt.

Lauren Lyle was next on to the carpet wearing a stunning white vintage dress and some killer heels.

Bev asked Lauren what it was like to be back in Glasgow for the special showing.

She said: “I’m Glasgow born and bread, so proud to be in Glasgow to bring it home it’s amazing!”

Lauren went on to say that some of the highlights on the show were working as a family and getting to shoot scenes together as they have a real laugh on set, she also said that fans can expect some darkness in this series.

Bev asked if she managed to get any memorabilia from season six, and she revealed that she actually took home Marsali’s wedding ring, and while she didn’t have it on on the red carpet, costume bosses may have asked for it back.

John Bell looked out of this world in a pink suit and a pair of chunky Balenciaga trainers.

He told Bev he spent most of his time in lockdown living in Spain, but he was very grateful to film the new season.

He said: “It was incredible, I’m just very grateful to have a job at this time, you know to be here celebrating and supporting is fabulous!”

For those who don’t know, Joanne plays a new character called Amy McCallum in the new season so she introduced herself on the red carpet.

The new season airs on Sunday on STARZ PLAY.