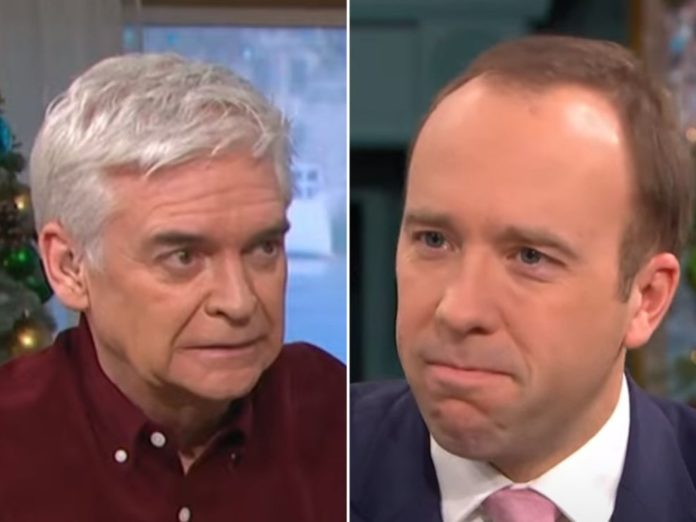 Phillip Schofield has divided The Morning viewers after he put a brutal question to Matt Hancock that referenced him infamously breaking Covid lockdown rules with his affair scandal from earlier this year.

Appearing on the show to campaign his new bill that calls for all primary school kids get dyslexia screenings, as Hancock himself wasn’t diagnosed until he attended Oxford University.

“It’s shocking fact that estimates are that a fifth of the children get identified if they’re dyslexic in school and I want to change that and I want to have screening for all pupils in primary school and then the support and teaching to help them because once you’re identified… then you can work out how to cope with it,” Hancock said and revealed he was re-taught how to read and write and to “see words as pictures.”

After discussing the bill and how to reduce the stigma surrounding dyslexia, Schofield ceased an opportunity to grill Hancock on breaking social distancing rules after the Tory MP was caught on CCTV embracing his aide at the time, Gina Coladangelo, in his office earlier this year.

Schofield asked: “Was it your dyslexia that meant you misread the social distancing rules?”

The question prompted a flinch and a smirk from co-host Holly Willoughby, while Hancock dismissed any suggestion that his dyslexia had anything to do with his rule-breaking.

“No, I can’t blame that on dyslexia or anything else. In fact, I’m not asking for any special favours or anything because I’m dyslexic and in politics I’ve got some things to offer,” he told the presenters.

“It was a failure of leadership because I came on shows like this and asked people to do things and I didn’t follow those rules myself.”

He added: “I think that Sajid Javid, who’s doing the job, is doing an excellent job.”

The exchange quickly gained traction on social media, with some people finding amusement in the pointed question.

However, many people slammed Schofield’s line of questioning calling it “below the belt” and “totally unnecessary” and also felt that it took away from the important topic at hand to raise awareness around dyslexia.

Those critics also thought that Schofield was mocking people with dyslexia by incorporating it into his question.

People couldn’t help but peep Willoughby’s flinch and smirk in response to the awkward question.