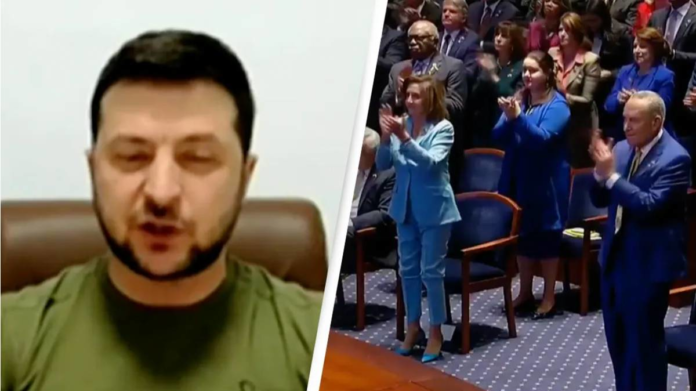 Ukrainian President Volodymyr Zelenskyy referenced Martin Luther King’s ‘I have a dream’ speech in his historic address to the US Congress.

It comes amid the 21st day of Vladimir Putin’s ‘special military operation’ in Ukraine, with more than three million people fleeing as a result of the conflict, which has taken the lives of thousands of civilians and troops on either side.

In his most recent nightly address to the people of Ukraine, Zelenskyy said peace talks were looking ‘more realistic’, despite Putin accusing Kyiv of not committing to serious resolutions, with further shelling rocking the capital.

As Zelenskyy’s speech began, he was met with a round of applause from everyone in the Senate. House Speaker Nancy Pelosi said it was a ‘great honour’ to introduce the president.

Zelenskyy “I have a dream – I have a need. I need to protect our skies” > Just as Zelenskyy quoted Shakespeare and echoed Churchill when he addressed UK parliament, he quotes Martin Luther King to US Congress

The president went on to outline how Russian forces have ‘threw tanks and planes against’ Ukraine’s ‘freedom’, and his wishes for the same ‘democracy’ and ‘care for everyone’ seen in the US.

“In your great history you have pages in your history which allows you to understand where we are right now… remember Pearl Harbour. December 1941 when your sky was black… just remember it. Remember 9/11… nobody expected it… our country experiences the same every day,” he continued.

Addressing Congress, @ZelenskyyUa asks Americans to remember Pearl Harbor & 9/11 and says “we need you.” He asks for a no-fly zone but says if that can’t be done, send more military assistance. “I have a dream…I have a need.” pic.twitter.com/n56YNDC0AH

Zelenskyy also referenced King’s famous speech, telling lawmakers they’d be familiar with the words: “I have a dream… I have a need – I need to protect our skies.”

Ahead of the president’s address, Senate Majority Leader Chuck Schumer said: “It’s one of the highest honours of any Congress to welcome remarks by foreign heads of state, but it is nearly unheard of, unheard of in modern times that we hear from a leader fighting for his life, fighting for his country’s survival, and fighting to preserve the idea of democracy, something Americans cherish.”

Ukrainian President @ZelenskyyUa draws comparisons with Pearl Harbour and 9/11, and invokes Martin Luther King’s ‘I have a dream’ speech in his plea to US Congress for military support to fight the Russian invasion.

It also comes after US President Joe Biden signed a $1.5 trillion government funding bill, which also factors in $13.6 billion in supplemental aid to Ukraine.

“We’ve been providing anti-armour – taking out tanks, anti-air capabilities, directly – directly to the Ukrainian forces. And we’re also facilitating significant shipments of security assistance from our Allied partners to Ukraine,” Biden said, as per ABC News.

“With this new security funding… we’re moving urgently to further augment the support to the brave people of Ukraine as they defend their country.”