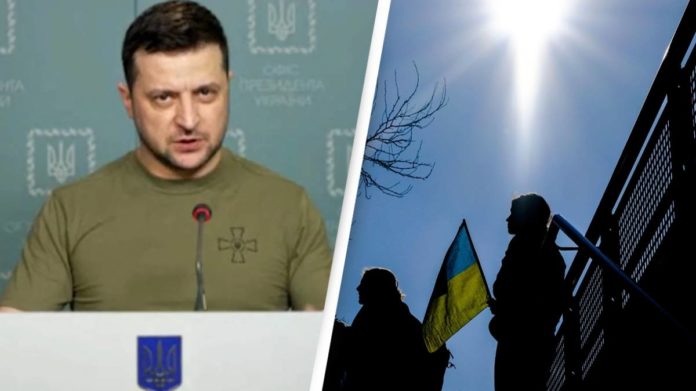 President Volodymyr Zelenskyy has sworn to punish everyone involved in the invasion of Ukraine, after a mother and her two children were killed while trying to escape.

Yesterday, March 6, Russian forces shelled the northern city of Irpin, which is located 16 miles northwest of the country’s capital, Kyiv.

Eight people are reported as having been killed as they were trying to flee, including two children and a mother from the same family.

In a broadcast that aired late last night, Zelenskyy vowed to ‘not forgive’ and ‘not forget’ the killings and to ‘punish everyone who committed atrocities in this war’.

Russian forces have attacked families fleeing their homes in Ukraine.

In Irpin, a town just outside of Kyiv, people were caught in shelling on Sunday, which killed three members of a family, including children. pic.twitter.com/gVXCXvCoa8

The family and others had been attempting to cross a damaged bridge when the mortar shells hit them, The Independent reports.

Reports claim that the two siblings killed in the shelling attack were an 8-year-old girl and her teenage brother, per New York Post.

Zelenskyy stated: ‘A family was killed in [Irpin] today. A man, a woman and two children. Right on the road. … When they were just trying to get out of town. To escape. The whole family. How many such families have died in Ukraine!

‘We will not forgive. We will not forget. We will punish everyone who committed atrocities in this war. On our land. We will find every bastard. Which shot at our cities, our people. Which bombed our land. Which launched rockets. Which gave the order and pressed ‘start’. There will be no quiet place on this Earth for you. Except for the grave.’

As well as yesterday’s mortar shelling, Irpin has also been subjected to artillery and air strikes.

Ukrainian soldiers have been left desperately trying to aid the evacuation of fleeing citizens, particularly the young, vulnerable and elderly, across areas left obliterated by shells.

Spent the day in Irpin, 16 miles from Kyiv. Thousands of civilians have fled over rubble, a river, then under a blown-up bridge to escape Russian bombardment. Met an elderly woman… alone, using a walking stick, clutching railings for support. She said she had escaped “hell” pic.twitter.com/e0hGyt59V1

‘[The] audacity of the aggressor is a clear signal that sanctions against Russia are not enough,’ he stated.

Earlier today, March 7, it was reported that Russia announced it will stop military action ‘in a moment’ if the Ukraine agrees to three conditions. The country’s agreement for a ‘temporary ceasefire’ to aid citizen’s safe evacuation through humanitarian corridors on March 5 was also allegedly broken, after reports came through of continued attacks.

The president concluded: ‘This is murder. Deliberate murder. And I have not heard a reaction from any world leader today.’