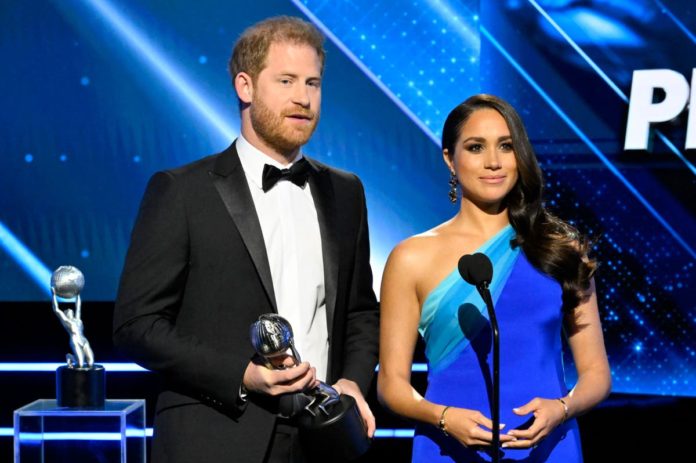 The Duke of Sussex said he and his wife, the Duchess of Sussex, “were brought together for a reason” as the couple appeared on stage at the 53rd annual NAACP Image Awards to accept the President’s Award.

Prince Harry and Meghan Markle received the prestigious accolade, which recognises “special achievement and distinguished public service”, at a ceremony in Los Angeles on Saturday 26 February.

Other past recipients of the honour include boxing legend Muhammad Ali, former US President Bill Clinton, Jay-Z, LeBron James and Rihanna.

Accepting the award on Saturday, Harry told attendees: “I think it’s safe to say I come from a very different background to my incredible wife, yet our lives were brought together for a reason.

“We share a commitment to a life of service, a responsibility to confront injustice and a belief that the most overlooked are often the most important to listen to.”

Meghan added: “I couldn’t be prouder that we’re doing this work together.”

“We are so deeply humbled to be here in the company of such illustrious awardees.”

The NAACP announced on Thursday 24 February that it had selected the Duke and Duchess of Sussex to receive the award for “heeding the call to social justice” and joining “the struggle for equity” in the US and around the world.

Harry also introduced the new NAACP-Archewell Digital Civil Rights Award, which recognises those who are creating “transformational change at the intersection of social justice and technology”.

The inaugural recipient of the 20222 award is Dr Safiya Noble, an internet studies scholar and author of Algorithms of Oppression: How Search Engines reinforce Racism. She has received $100,000 to advance her work in her field.

“This community knows what it means to speak up for what is right and to march forward is just,” Harry said.

“As the fight for justice for justice still remains, it’s time to extend this march to the world online, a place where hate and discrimination are fueled instantly, propagated globally and felt deeply.”

Meghan added: “This is the era of the digital justice movement. We are proud to partner with NAACP and each of you to translate the vital efforts of those who came before us to the modern challenges that exist ahead of us.”

She accessorised the asymmetrical gown, which featured a thigh-high split and a flowing cape, with gold Aquazzura heels in the style Celeste and earrings by Alexis Bittar.