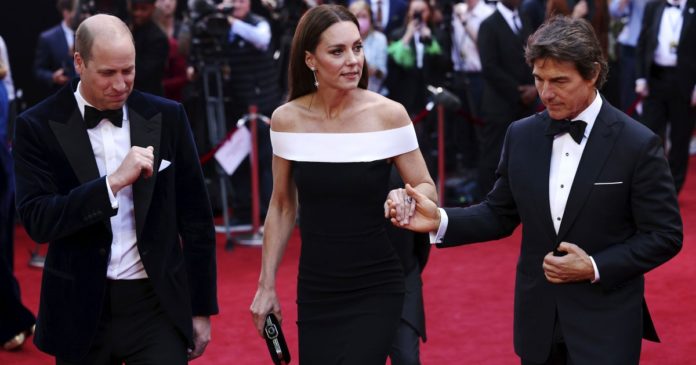 The Duchess of Cambridge, 40, wore a black-and-white Roland Mouret gown with an off-the-shoulder neckline to the event on Thursday, May 19, while her husband, 39, complimented her in a classic tuxedo. The premiere was also a fundraiser for The Film and TV Charity, which supports people working behind the scenes on U.K.-based TV and film productions. At one point in the night, Kate was helped up the stairs into the theater by Cruise, 59, who chatted with the royals as they made their way down the carpet.

“[Prince William and I] have a lot in common. We both love England and we’re both aviators, we both love flying,” the Mission: Impossible star told reporters ahead of the royals’ arrival, per The Daily Mail. Cruise also expressed his excitement at attending a major premiere in the wake of the COVID-19 pandemic. “I love what I do, I’ve always enjoyed it and I’m enjoying it even more now,” he noted. “Particularly after the last couple of years, just to have an event like this is extraordinary.”

Cruise is reprising his role as pilot Pete “Maverick” Mitchell in the blockbuster sequel, 36 years after starring in the original 1986 film. “We’re going to have the same tone that we had from the first,” the Jerry Maguire star told Access Hollywood in June 2017. “Stylistically, it’s going to be the same.”

Earlier this month, he confirmed that costar Val Kilmer also returned for the new film: “I really rallied hard for him to make the movie,” the Vanilla Sky actor told Entertainment Tonight about the cameo. “The kind of talent that he has, and you see that scene [with him in it], it’s very special. It’s just very special.”

The Top Gun: Maverick event is the second major red carpet moment that the duke and duchess have enjoyed after the loosening of COVID restrictions, following the No Time To Die premiere in October 2021. “Kate had her own Bond girl moment at the No Time to Die premiere,” a source close to Kate told Us Weekly at the time. “She oozed confidence and old school Hollywood glamor.”

For that event, the mother of three wore a gold Jenny Packham gown with statement sleeves and a ruched bodice as an homage to the late Princess Diana. “Kate admired Diana’s taste in fashion before William came into her life. During her school days she’d tell friends that Diana was her style icon,” the insider continued. “She is taking inspiration from the late Princess and wanted to pay homage to on the night of the No Time to Die premiere by channeling the dress Diana wore at the View To A Kill premiere.”

William, for his part, recently honored his mother while speaking at the official opening of the Manchester Arena memorial. “As someone who lives with his own grief, I also know that what often matters most to the bereaved is that those we have lost are not forgotten,” he said in his speech on May 10. “There is comfort in remembering. In acknowledging that, while taken horribly soon, they lived. They changed our lives.”