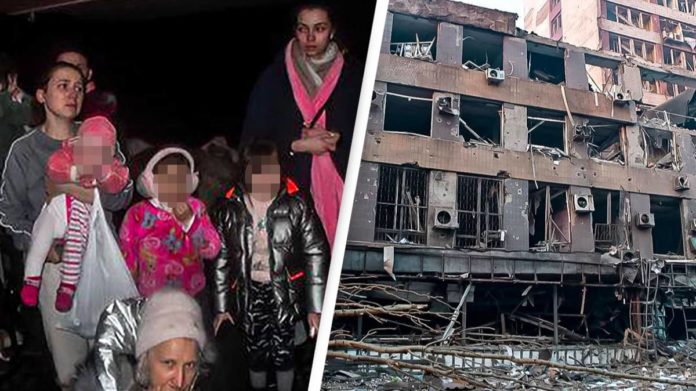 Parents have reportedly been forced to abandon premature babies in a Mariupol hospital after Russian troops took 500 people hostage.

Five people died in the attack – including a pregnant woman who was photographed being stretchered out of the hospital in the fallout of the attack – with 17 people, including children, women and doctors, sustaining injuries.

A guy-wrenching bird’s eye view of the hell that Russian forces have unleashed on Mariupol, where more than 2,000 people have been killed. There’s no power, no heat, no running water. Food is running out. Video shared by the Ukrainian Interior Ministry. pic.twitter.com/FQwkLnXjFC

Around 20,000 people have managed to flee the besieged port city, though Russian troops are said to have seized a hospital and taken around 500 people hostage, according to regional leader Pavlo Kyrylenko.

As a result of the conflict, parents have abandoned premature babies in the hospital, AP News reports.

One photograph shows three premature babies lying side by side in hospital, swaddled in blankets, who’ve reportedly been left behind by their parents.

Russian forces have driven 400 people form their neighbouring homes into the Regional Intensive Care Hospital, where they’re being held hostage alongside 100 doctors and patients.

Kyrylenko said the Russian soldiers are using the hostages as human shields and are refusing to let anyone leave the hospital. ‘It’s impossible to leave the hospital, they are shooting hard,’ he said, as per Sky News.

‘Cars can’t drive to the hospital for two days already. High-rise buildings are burning around. Russians drove 400 people from neighbouring houses into our hospital. We can’t get out,’ he added.

It’s estimated that Russian troops have killed more than 2,300 people in its attacks in Mariupol, leaving hundreds of thousands struggling for food, water, heat and medicine. Bodies have also reportedly been buried in mass graves.

Marina Panova, 81, spoke to Al Jazeera after managing to escape the city. ‘Why did they come to our land? Why? Why did they come to spill the blood of our children? Nobody asked them to come. We all want to live. We don’t need their Russia. Why do they inflict this on us?’ she said.

Yesterday, March 14, civilians in 2,000 cars escaped the city along a 160-mile long humanitarian corridor, said to be the biggest single evacuation from Mariupol so far. They drove west to the city of Zaporizhzhia, with another 2,000 cars waiting to leave behind them.