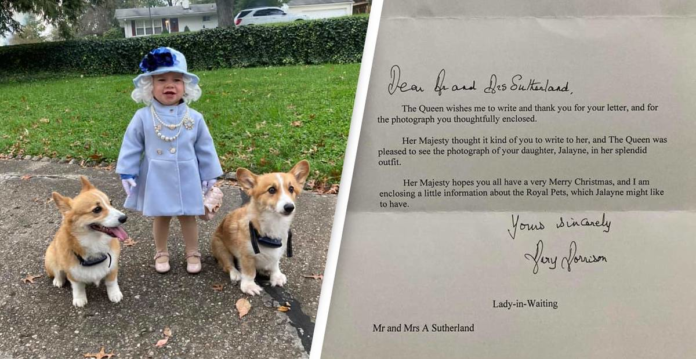 Queen Elizabeth II has given her seal of approval to one of her youngest fans after they dressed up as the monarch for Halloween.

One-year old Jalayne Sutherland, from Ohio, donned a replica of one of the Queen’s outfits, complete with a wig, brooch, handbag and pearls to head out trick-or-treating, and was accompanied by her family’s two dogs.

After receiving comments on the adorable snaps of the finished outfit from her friends and family, Jalayne’s mother, Katelyn, decided on a whim to send the images to the Queen, and was shocked when a few weeks later she received a letter in the post from the Queen’s lady-in-waiting, Mary Morrison.

‘The Queen wishes me to write and thank you for the letter, and for the photograph you thoughtfully enclosed,’ the letter reads. ‘Her Majesty thought it kind of you to write to her, and The Queen was pleased to see the photograph of your daughter, Jalayne, in her splendid outfit.’

It concludes, ‘Her Majesty hopes you all have a very Merry Christmas, and I am enclosing a little information about the Royal Pets, which Jalayne might like to have.’

Naturally, the family was blown away after receiving the letter, with Katelyn telling The Independent, ‘The first thing we did was call all our friends and family! They couldn’t believe it either!’

In a photo shared by the family, Jalayne can be seen proudly holding the letter, with her royal hat on in celebration. ‘We will most definitely be framing the letter and hanging it in Jalayne’s bedroom. It is something we will all cherish forever,’ Katelyn said.

According to Katelyn, they actually have the dogs to thank for the heartwarming tale, with Jalayne’s mother revealing she came up with the outfit because she’d wanted a costume that could include the pets, to whom she says Jalayne is ‘always sneaking’ food.

Naturally, Katelyn settled on the Queen, who is well known for nearly always being accompanied by her beloved corgis.

The mother added that the family hopes to visit Windsor Castle one day, and that Jalayne will ‘most definitely’ don her outfit for the occasion.