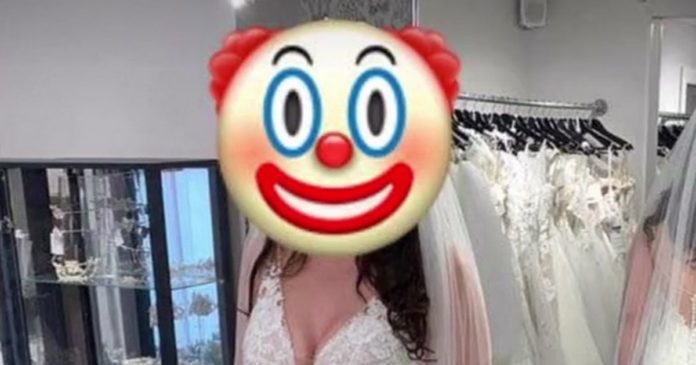 There’s nothing worse than a sour break-up, especially when it happens part way through planning your wedding.

A scorned man has put his ex-fiancée’s wedding dress up for sale on Facebook Marketplace, saying it’s perfect for a “cheap slapper”.

Adding a price tag of just £5, the man explains how he dodged a bullet after presumably catching his partner cheating before exchanging rings.

His advert reads: “Wedding dress – would fit a larger lady, quite chavvy in style so would suit a cheap slapper.

“Had a lucky escape so it’s brand new which is more than can be said for the intended wearer’s well-worn vagina.

Everyone is saying the same thing
(

Adding insult to injury, he simply titled the item as “wedding dress – size fat”, so when people come to search for budget gowns online, they’re met with his advertisement.

Commenting on the post, one Facebook user said: “Possibly one of the funniest things I’ve seen listed on market place.”

Another added: “Something tells me he’s never going to sell this dress.”

A third said: “OMG. I’m guessing she cheated then yeah look at the sale post!”

It comes after a bride was accused of being a “bridezilla” after banning her seven-year-old flower girl from wearing a white dress to her wedding.

The woman states she didn’t want to be “upstaged” by her future niece on her big day, despite her being just a child.

She said on Reddit : “We had decided to make my future niece the flower girl. She’s about to turn seven, is the sweetest little girl, and I thought the role would suit her perfectly.

“Needless to say, her mum approved, and she was ecstatic when I asked the both of them if they would be willing to take on this role.”

To help with organisation, the bride-to-be created a wedding group chat for female guests, providing them with a place to discuss their outfit options.

She added: “Her mum posted a picture of a small pure white dress in the chat, saying that it was for her daughter.

“I really wasn’t okay with this in any capacity. I think wearing white to a wedding is tacky, and could be taken the wrong way – like trying to upstage the bride.

“So, I privately messaged my future sister-in-law and asked her to maybe look at other options, like maybe a light pastel blue or pink, or something of the like.

“However, she told me that her daughter is really into the white dress, and that she really loves it, and it’s really just a dress, and shouldn’t be a big deal.

“Plus, it shouldn’t even bother me, because no one should see it as upstaging, considering she’s literally a child.”

Despite agreeing with many of her future sister-in-law’s points and acknowledging flower girls traditionally wear white, the bride-to-be put her foot down and banned the seven-year-old from wearing the dress.

“She has taken the time to reach out to me multiple times to try and convince me to change my stance, saying that her daughter would be heartbroken if she couldn’t wear the dress, they’ve both fallen in love with it,” she said.

“My answer every time has been a firm no.

“I’ve told my fiancé about this and he got upset with me, telling me about how I was making a big fuss over a child’s dress colour, and that this really doesn’t matter in the grand scheme of things at all.”