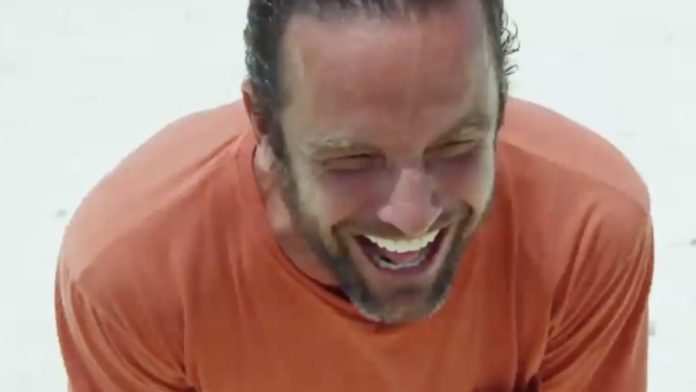 The Challenge host TJ Lavin appears to be thoroughly enjoying himself in the trailer for what’s on the way in Spies, Lies & Allies Episode 17.

While it doesn’t appear there will be a trivia challenge going on, agents will be knocked down to the water below, bringing TJ great joy as he laughs at the results.

The new preview trailer for Season 37, Episode 17, also teases one of the potential nominees for the upcoming elimination.

In Spies, Lies & Allies Episode 11, the agents had to leap from satellite arm to arm and make a leap of faith towards the final arm to yank wires out from underneath. The team to get the most competitors across and yank out wires the fastest would win the mission.

Some of the competitors dropped to the water below after their leap of faith. In some cases, they dropped without even trying the mission or fell off as they attempted to jump from arm to arm. Opposing teams could also knock them off balance by blasting a fire hose of water up at them.

In Episode 17, the agents are once again competing on a structure hanging above the water. From the looks of the mission, called Dead Drop, opposing players will get to swing large balls towards agents to try to knock them off the structure.

Several scenes show competitors struggling to keep their balance, with one falling to the water below. TJ erupts with laughter as he gets to watch it all unfold.

Once again, it’s an important battle, as the male agents are up for possible elimination should their team fail to win. Heading into the mission, Emerald has won five dailies, Sapphire has won two, and Ruby is winless.

In Season 37, Episode 16, it was a women’s elimination day. Big T Fazakerley volunteered herself to go into elimination, saying she wanted to win and infiltrate a spot on Emerald’s team. She called out rookie Emy Alupei, who came in and defeated Big T in License to Chill. That sent Big T home for good while Emy rejoined the Sapphire team.

In the trailer above, the Emerald team seems to be meeting at night to talk about the upcoming elimination. Kaycee is asking if anyone’s heard of anyone wanting to volunteer to go in. She appears to be speaking to Emanuel Neagu at the table, which could mean he’s going in.

The Survivor: Romania rookie is the only one who has yet to go into elimination. Emanuel’s potential opponents to call out would include Devin if Emerald lost the daily mission. Other possible opponents are the Ruby team’s Nelson Thomas or Logan Sampedro and the Sapphire team’s CT Tamburello or Kyle Christie.

Nelson, Devin, and CT have yet to compete in any eliminations for Spies, Lies & Allies. However, these vets have all proven themselves in other seasons with significant elimination wins when they counted, which could make others less likely to call them out.

Viewers will get to see who wins the Dead Drop mission and which men head into the elimination when Episode 17 debuts on Wednesday, December 1.