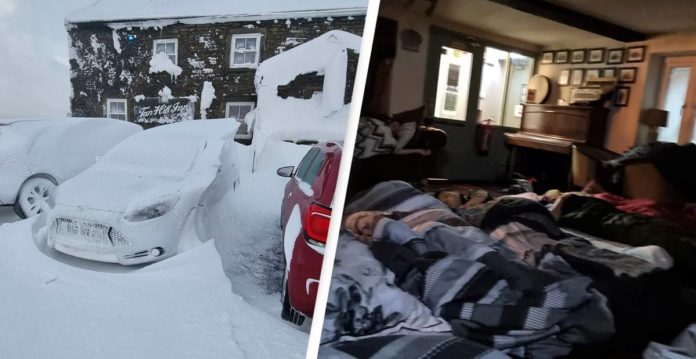 ‘Noasis’, an Oasis tribute band, and their audience got trapped overnight in a British pub thanks to Storm Arwen.

On Friday, November 26, the highest pub in Britain, called the Tan Hill Inn, which dates back to the 17th Century, was faced with five feet of snow.

Located in the Yorkshire Dales, around 50 of the pub’s punters had to remain inside with the band, after icy blizzards buried their vehicles and made it impossible to leave.

By 9.00pm, weather conditions had gotten so bad that all who had travelled to attend the gig, and any other pubgoers, were forced to bed down on the floor of the bar.

The next morning, snow drifts were found to have buried the pub, which is 1,732ft above sea level.

Even by lunch time on Saturday, November 26, guests were advised to remain in the pub as nearby roads had become inaccessible, with any main road being at least 10 miles away.

We recommended anyone in the pub to stay out rather than endanger life on the snow covered moors.

No one is going anywhere yet. The police advised we all stay out for now. Our snowplough is snowed in.

Tom Rigby had booked into the pub for the night with his girlfriend, and said the snow just kept getting ‘deeper and deeper’ after they set off at about 6.00pm.

However, the freight train driver said the staff worked together well and made sure ‘everyone [was] kept informed, fed and watered’, calling the employees a ‘credit to the pub’.

Some pubgoers did reportedly attempt to leave, however one road was blocked and another not gritted, and so they ‘got stuck’. According to Rigby, a couple even bizarrely decided to camp outside in a tent and had to be rescued.

In preparation for a swift escape, those remaining at the pub have been told to have their bags packed ready and waiting in case a plough comes to clear the way.