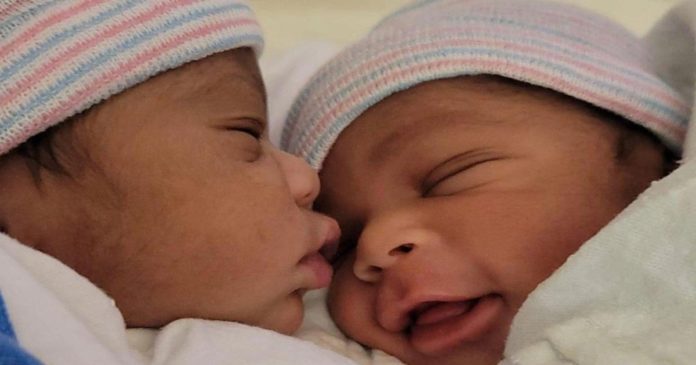 The likelihood of a third set of twins for one mom without fertility treatments is very unlikely. But, one New York couple has hit the baby jackpot by doing exactly that and rounding out their family at an even dozen!

Kimberly and John Alarcon shared on social media that two sweet baby girls have completed their tribe. The girls are Kenzy and Kenzley, and they make the third set of twins for the couple.

The newborns are already distinguishing themselves from one another. Kenzy, born 3 minutes before Kenzley, was the smaller of the two at 4 lbs., 15 ounces, and she likes milk! Kenzley is the younger but bigger baby girl, weighing 5 lbs., 9 ounces, and she is a cuddler!

If momma can keep Kenzy fed, it’s probably pretty easy to keep Kenzley in cuddles. You see, Kenzy and Kenzley came home to a house full of siblings-8 in total! There is 17-year-old Brittney, 13-year-old Sarah, and 10-year-old Hunter.

Woman’s Third Set Of Twins Make Her Mom To 10

Kimberly and John have always wanted a big family, and the numbers haven’t overwhelmed them yet. Kimberly grew up in a very large family. Her mother had ten biological children and adopted 8. And, actually, Kimberly and John might have had 11, but a miscarriage prevented that. Kenzy and Kenzley were two of three initially, but one was lost during the pregnancy. That happens in about 20% of triplet pregnancies.

“We have good days, we have bad days, just like any other family,” Kimberly shared. “We just take it one day at a time.”

The odds of having three sets of twins naturally is like 1 in 200,000! Indeed, The Alarcons are big winners! But… it might not be time to try the lottery. The odds of winning a single-state lottery are about 1 in 42 million. No matter. We’re betting that Kimberly and John would rather have babies than bucks any day of the week!