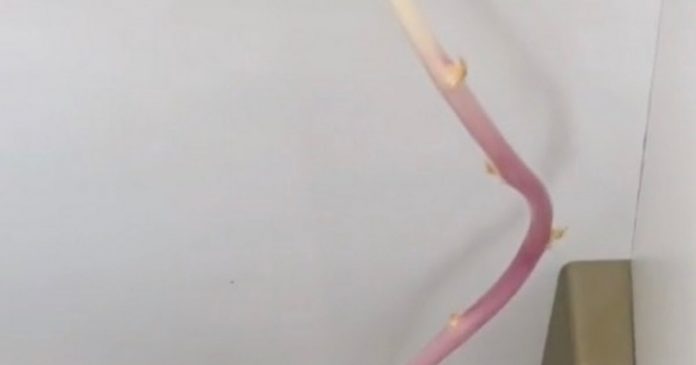 TikTok user finds potato growing at back of cupboard

Springtime has arrived and that means most of us will be spurred on by the better weather and sunlight to spruce up the house – which includes having the dreaded task of clearing out the back of the cupboards.

Usually forgotten tins of soup or slightly out of date flour will live at the back, but this one lad got a real jump scare after finding something lurking at the end of the concealed shelf.

Tom, who goes by the TikTok name @mistermilligan, was in for quite a fright when he went to grab some sweetcorn from his cupboard to find an ‘umbilical cord’ like growth poking from the back of it.

The lad first thought his oat milk had sprouted some sort of growth from the carton.

But in fact, his cupboard had been invaded by a rogue potato hiding at the back – and it gave Tom quite the scare.

He has now shared his discovery on TikTok and thanks to his hilarious commentary, the clip has now racked up 1.2million views.

Tom explained in the video: “I have just opened the cupboard to get some sweetcorn out and I saw this.”

He then panned to purple and white shoot inside of the cupboard.

“I have no idea what it is attached to,” Tom admitted.

As he carefully moved his Marmite jar out of the way, the potato almost came to life as it fell forward with the sprout nearly hitting him.

Tom swore and jumped back at the good-for-nothing sprouted spud as it peered out of the cupboard.

He continued to move a tin out of the way to reveal the small potato at the back of the cupboard, he gasped: “Oh my God, it’s a potato.”

However, Tom admitted he initially feared for the worst.

“In my head it was a little shop of horrors sitch, so I was relieved when it was just a little spud.”

Left in stitches at the spud sprouting ordeal, many people fled to the comments to share that they were also scared at the shoot.

One person gasped: “I got such a fright when it fell down!!!”

Another user added: “I just died when the sprout came for you.”

Whilst a third person chuckled: “Well you shouldn’t kill it now, it’s worked really hard to sprout like that lol.”

Someone else voiced: “Immediately no, I have a phobia of potato roots.”

Meanwhile, a fifth user giggled: “Potato was holding on for life.”

And, this user questioned: “Why does it have an umbilical cord?”

Get all the biggest Lifestyle news straight to your inbox. Sign up for the free Daily Star Hot Topics newsletter