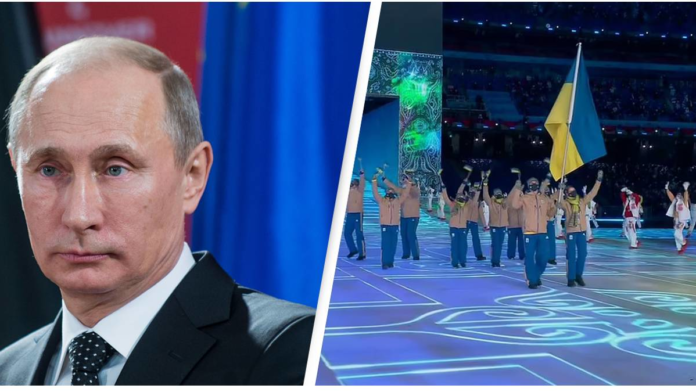 Russian President Vladimir Putin has seemingly taken aim at Ukraine’s athletes after he appeared to be asleep as they entered the Beijing Winter Olympics opening ceremony.

Today, February 4, marked the start of the Winter Olympics, however not everyone was seemingly overjoyed by the prospect of the games beginning.

Putin was caught on camera looking like he was using the moment Ukraine came out to catch up on sleep, sparking further tension between Russia and the country, who have feared being on the brink of war after an estimated 100,000 Russian soldiers were reported as having gathered on the border of Ukraine.

Alongside being caught out appearing to nod off, Putin was also viewed controversially for his decision to not wear a mask, despite China’s strict rules which state they must be worn, as per Mail Online.

An eyewitness reported: ‘Putin arrived as if he was the emperor. It was pretty rude of him.’

Alongside Putin’s apparent nap, prior to the opening ceremony a Russian sports propagandist called Guberniev allegedly ‘provoked a Ukranian journalist, calling him in English a ‘loser’ and a ‘b*stard’,’ according to a Twitter user.

‘There has never been such a thing! Sport in the Russian Federation is out of politics. And out of the war. Foreign agent, probably,’ they stated.

General Secretary of the Chinese Communist Party and Chairman of the Central Military Commission Xi Jinping and Putin were among the few leaders to attend the games, after Friday saw them publicly confirm their newfound relationship, Metro reports.

The two countries stated that the ‘friendship between the two States has no limits,’ and that ‘there are no “forbidden” areas of cooperation’.

Fears have been rising that Russia may ‘engineer a pretext, blaming Ukraine for the attack in order to justify a Russian incursion into Ukraine,’ according to a spokesperson for UK Prime Minister Boris Johnson.

Although the idea was later deemed as ‘nonsense’ by Sergei Lavrov, the foreign minister of Russia.

It was recently revealed that US President Joe Biden is sending 3,000 troops to Poland and Germany ‘for a variety of missions during this period of elevated risk,’ despite how Russia has continued to deny plans to invade Ukraine.

In a press conference on Wednesday, January 2, Putin also accused the US of trying to coax Moscow into war as tensions have been mounting.

‘It seems to me that the United States is not so much concerned about the security of Ukraine… but its main task is to contain Russia’s development. In this sense Ukraine itself is just a tool to reach this goal’, he said.