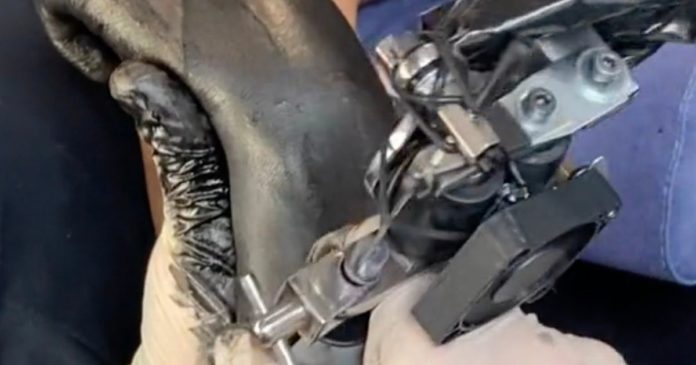 A woman is said to have endured a high ‘level of pain’ after getting a black tattoo that covered her whole arm.

The body art fan visited artist K. Letatoueur in Caen, France and asked for a blackout tattoo on her left arm so her hand would resemble a glove, as the Daily Star reports.

The tattoo artists shared a video of the inking to TikTok, and the customer is seen lying on a reclining chair facing towards the wall while they get to work with the needle.

The professional runs the tattoo gun back and forth over the skin, covering the front and back of the arm, before adding a triangle shape on the back of her hand to create a clever illusion.

A woman having her arm covered in a black tattoo
(

The inking was very extensive
(

What do you think about the woman’s tattoo? Let us know in the comments…

The video has been viewed more than five million times – and many viewers were stunned by the extreme tattoo.

A second said: “People do anything for attention.”

“I do like the black sleeves but… I don’t get why people get them,” a third added.

Some said the design reminded them of black clothing, with a viewer suggesting: “Just wear a black T-shirt.”

“I will design a black glove for you for free but please don’t do that,” another penned.

Others who have had tattoos done in the past guessed the woman have endured a high “level of pain” with all the “wiping motion” the tattoo artist was doing.

Meanwhile, a woman has been left wishing she could turn back time after letting her ‘friend’ tattoo her eyebrows on – only for it to end in disaster.

Abigail, who posts from the handle @itsabigailb*tchhhh on TikTok, recently took to the app to show her eyebrow tattoos, which are placed much higher than her actual eyebrows.

But, the most devastating part of it all, is the fact that the botched brows were done by someone Abigail considered to be her friend – although we’re not sure that’s still the case.

“When you let your ‘mate’ tattoo your eyebrows,” she wrote on top of the clip, alongside the caption: “It be your friends who hate on you.”