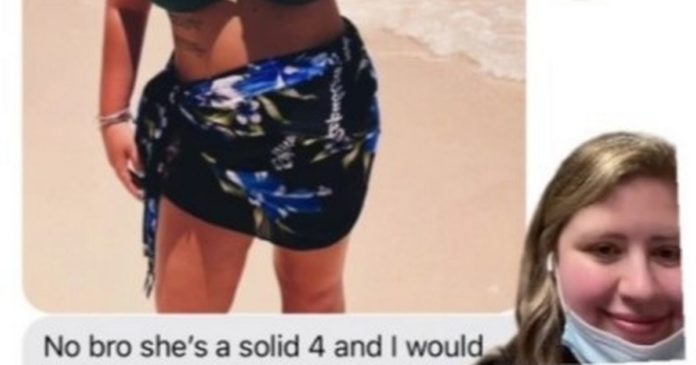 She couldn’t believe it

A woman was left stunned when she received a message from a date that was meant for his friend.

TikTok user Samantha Rose explained that she had been talking to Jake, a guy she met on Bumble, for a few days before their conversation moved to iMessage.

Chat between the pair appeared to be heating up as he showered up with compliments before their upcoming date.

In a video that has been viewed more than 7.8 million times, Samantha, who goes by the username @samantha_roseeeee, shared a screenshot of the conversation which started with Jake saying: “Yeah I can’t wait to meet you! You’re beautiful. Would 7ish work?”

Samantha then replied: “Thank you that’s sweet. Yeah, that should be fine!”

“I’ll be coming straight from work so you’ll have to look over my work uniform,” he told her.

To which she put back: “Haha no worries, I’m in scrubs so I understand.”

And the flattery continued as he sweetly said: “I’m sure you look beautiful either way. I’m a lucky guy to get to take you out.”

All seemed to be going well between the pair until he accidentally sent Samantha a text meant for one of his pals.

Alongside a snap of her in a bathing suit, Jake wrote: “No bro she’s a solid 4 and I will forsure keep it on the low but desperate times call for desperate measures and beggers [sic] can’t be choosers all I saw was t*ts and an easy lay.”

When he realised his mistake he text her to say he “was talking about someone else and clicked her picture by accident.”

She wasn’t expecting this text

“I was quite literally too stunned to speak,” she said, explaining her reason for not responding to the vile messages.

Since being posted, the video has been liked almost 900,000 times and has received 16,800 comments from stunned viewers.

One person said: “The craziest part is that you look so good in that picture.”

Another wrote: “Whether he was talking about you or not [red flag] that he’d talk about ANY woman that way.”

“Did he think his attempt of saving the situation was somehow better???” asked a third.

And it turns out that Jake ended up seeing the video after it went viral, and text her about it.

She shared further text messages from him where he wrote: “So you’re just not going to show and then make a TikTok about me?

“It was a joke but I should have picked up that you were crazy when you said you foster kids. You can’t get a man so you get a bunch of broken little kids to fill that void.”

‘My boyfriend’s ex left her make-up behind – I’m not mad, I use it all the time’