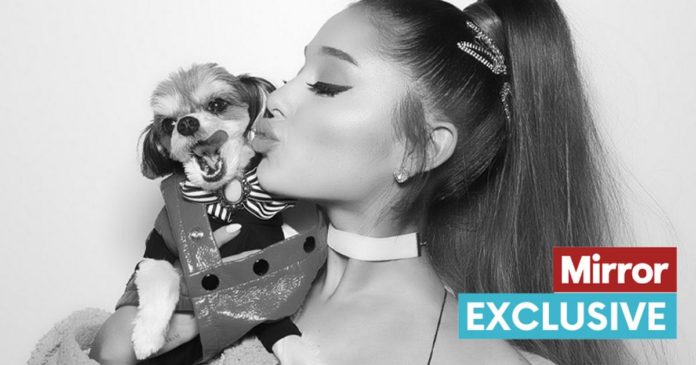 Famous pooches, Tinkerbelle and Belle, based in New York, USA, are on VIP celebrity guest lists, sit front row at Paris Fashion Week and even have their own one-of-a-kind Gucci dog collars

It’s a Cinderella story for 10-year-old dog Tinkerbelle – once a shy rescue puppy, she is now a world-famous canine celebrity and has been kissed by the likes of Ariana Grande and Taylor Swift.

Owner Sam Carrell, from New York, USA, rescued Tinkerbelle as a nine-month-old pup from a shelter a decade ago, and has since garnered her more than 750,000 online fans.

The luxurious and lovable pooch has gone from rags to riches, and her new baby sister, Belle, is already following in her successful paw prints.

Talking about her pets’ stardom, Sam told The Mirror : “Many celebrities want to meet them and be photographed with them. Seeing their faces light up is unbelievable.”

Lizzo screamed when she saw Tinkerbelle in the audience
(

Ariana Grande is one of her many A-list celebrity friends
(

Sign up to our TeamDogs newsletter for your weekly dose of dog news, pictures and stories.

Ten years ago, Sam took home a tiny papitese (papillon/Maltese cross) puppy and named her Tinkerbelle after her tiny size.

When she was just one year old, Tinkerbelle was scouted by a pet modelling agency in the streets of New York City.

Her first modelling job was for Ralph Lauren, and she instantly became the face of the campaign.

“I remember seeing her in high fashion magazines, all over billboards and subways,” Sam recalled.

“A stylist at the photo shoot insisted on creating a dog Instagram account for her. That’s where it all started.

“By saying yes to things on Tinkerbelle’s journey, it’s opened worlds for us both.”

Now, Tinkerbelle is verified on Instagram and her pet passport is stamped with trips from London, Paris, Italy, Mexico, The Bahamas and the Dominican Republic.

“I never expected her to become famous – it all happened by chance,” Sam said. “It’s been the most rewarding and amazing adventure.”

Her fame has even brought her a baby sister, after one of Tinkerbelle’s fans begged Sam to adopt her papitese puppy.

She was once an unwanted rescue puppy
(

Now she lives a life of luxury in New York
(

One-year-old Belle joined the family last year, and is already an official pup for the Empire State Building and featured on Saturday Night Live.

“Belle is the fiesty little one who constantly tries to play and annoy her older sister,” Sam said.

“They both love the camera and people. The second they step onto the catwalk, their whole beings lights up.”

Tinkerbelle’s acting and modelling career has led her to meet dozens of A-list celebrities, including Kevin Jonas and Whoopi Goldberg.

Many of these famous faces recognise her in the street and get excited to scoop her up.

“When we were watching Taylor Swift perform live, Lizzo caught Tinkerbelle in the corner of her eye and said ‘OMG there she is’ and grabbed her out of my arms,” Sam explained.

The pint-sized pup has walked in Paris Fashion Week and partnered with brands like Pixar, Disney, Amazon, Netflix and Universal Pictures.

“Her biggest achievement is being nominated for an EMMY Award,” Sam said, alongside her Webby Award, Shorty Award and Silver W3 Award.

The pooch’s biggest brand deal is her most recent partnership with Super Bowl for Puppy Bowl.

They are the new faces of the Empire State Building
(

It’s a Cinderella story for these two pups
(

“My favourite campaign is her Le Marca Prosecco shoot. It was so diva and glam. The set-up was modelled like Breakfast at Tiffany’s,” Sam said.

It’s no surprise that the doggy duo have an impressive cabinet of clothing and accessories at home.

“These two have more clothes than I do, and much better designer brands,” Sam said.

From pet pyjamas to sunglasses, hats and shoes – they have it all, and never need to wear anything twice.

“Once they’re photographed in something, I have to switch it up and rotate,” Sam explained.

Their most expensive designer items are real Gucci dog collars – which were made especially for them by the fashion giant.

“They don’t even make dog collars but Tinkerbelle did a modelling job and they made her one. They’re like tiny Gucci belts with the GG buckle,” Sam said. “We have three in pink, red and black.”

When Tinkerbelle isn’t strutting her couture wardrobe down a Hollywood runway or jetting off on a lavish trip, you’ll find her curled up asleep at home with Sam.

“My dogs mean more to me than anyone or anything,” she said.

“They are taken care of before I take care of myself. I can’t imagine my life without them.”

Do you have a dog story to sell? Email [email protected]